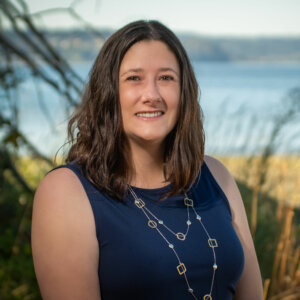 Seattle, WA — Lindal Cedar Homes is pleased to announce that Christina Lindal has assumed a new role as president of the company, effective September 1, 2022. An experienced leader, Ms. Lindal was previously executive vice president of the Company. She succeeds her father, Bob Lindal, who has spent the past few years gradually transferring responsibility for day-to-day operations to his daughter. He will remain involved as Chairman of the Board.

“I drew my first paycheck from Lindal 60 years ago, and became CEO and president in 1981,” Bob Lindal said. “While I’ve never had a timeline for the change in leadership, it’s always been the plan to transfer management of the company to the next generation when the time was right. That time has come. I have full confidence in Christina’s experience and ability to lead Lindal successfully into the future.”

Christina Lindal joined the company shortly after graduating from Scripps College in Claremont, CA, with a degree in molecular biology. She spent the next 15 years working in various positions at the company to become familiar with all aspects of the business. “When I first started, I spent a few weeks in every department, including marketing, accounting, sales, and manufacturing,” she said. After several years in customer service and inside sales, she was promoted to sales manager, then vice president, and has served as executive vice president since 2018.

“I’m pleased that Christina is stepping into the role of president,” said Sig Benson, a former vice president of marketing at the company who now sits on the board of directors. “The Lindal family of dealers, clients and employees will benefit from her hard work and this well-deserved promotion.”

“One of the reasons for taking this role is that I am the person who is here every day to work on the health and success of Lindal dealers and staff,” Christina said. “There’s a huge desire in me to focus on bigger-picture things.” In addition to developing a new strategic plan, her priorities as president include the acquisition and retention of core employees and dealers, maintaining excellent customer service, and “staying ahead of our clients’ desires.”

“The housing industry is different than it was two years ago, and Christina is capable of evolving with clients’ lifestyles to keep Lindal relevant,” Benson said. “She has proven her ability to lead the company and maintain the extraordinary quality of design and value Lindal provides homeowners.”

Christina represents the third generation – and the first woman – to assume leadership of the family-owned company. The construction and manufacturing industry has one of the lowest percentages of women in top positions, with fewer than 3% of female CEOs globally. Lindal emphasized that she hasn’t allowed her gender to hold her back in a traditionally male-dominated field.

“I went to an all-women’s college that gave me a very strong will to follow my passions and dreams,” she said. “I feel I’ve always been able to prove myself every step of the way – I’ve been able to show people that I can roll with the rest of the guys. There’s nothing that has kept me from doing what other people in my profession have done.”

Previous
Back to all