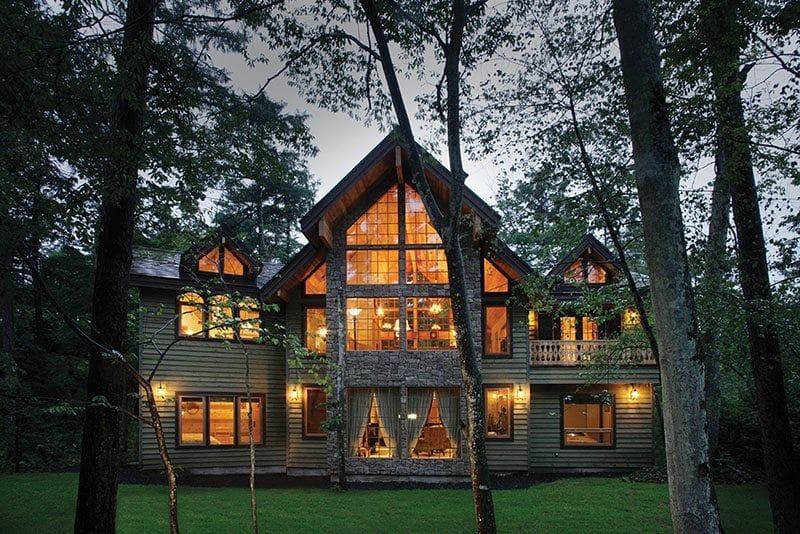 About 16 years ago, I saw my first Lindal Cedar design book.  I made up my mind at the time, I wanted to eventually build a home similar to the ones I saw in the book.  Over the next 12 years I purchased two more of these design books and I visited two dealers in my general area.

In 1997, as luck would have it, I was in the process of having work done, by my surveyor, on a beautiful 30 acre wooded property.  During a casual conversation with the surveyor, I mentioned my dream of building a Lindal Cedar Home.  He asked me if I had consulted Wayne and Anita South, of Cedar Classics. I told him that I had spoken with two other dealers, but I did not realize that they were located even closer to my property than the others.

I contacted Wayne and Anita and made an appointment.  It turned out to be the most important decision I made in obtaining my dream home.  Sitting and talking with Wayne and Anita was like being in a room with Bob Villa and Martha Stewart.  They compliment each other so well and they are unique in their approach with potential customers.  I never felt so comfortable with two people I had just met and they did absolutely nothing to pressure me in any way.

Throughout the design process they were so helpful, intuitive and supportive in helping me visually plan the layout of my home.  I had a basic design from the planbook that I liked (summit model), but there were a number of design changes and questions that I had.  Wayne and Anita both spent so much time with me, not just sitting and discussing the design, but they drove me to at least half a dozen homes they had designed with other customers.  Some of these were 45 minutes to an hour away in Pennsylvania and northeastern New Jersey.

The Souths were not just exceptionally helpful in the design stage.  The really significant help they provided was with the contractors they contacted on my behalf to bid on my construction job.  They planned and coordinated countless meetings with me and the other builders, acting as my advocate and helping me to understand information with which I was unfamiliar.

There were times, especially during this part of the process, I thought I was not going to be able to build my dream house at a price I could afford.  They were unbelievably supportive during this time and they kept me positive in attitude and focused on the project.  Sure enough, they were right and I eventually selected a builder to do the job at an affordable price.  Their support, however, did not end there. When the materials arrived, Wayne spent more than a day and a half helping me unload the materials from two shipping cars to two storage trailers.  He and Anita made numerous visits to my job site and they called me several times a week once construction began.  During several points during the construction phase, we discovered that some materials were incorrectly shipped.  They immediately worked on correcting the problem as quickly as possible.

My home was completed in December of 2000.  I was quite exhausted from all of the mental and physical work, but I know that without Wayne and Anita South helping me throughout the project, my dream home would not have been realized.  As a single professional, I did not always have the time or assistance to do the countless errands and make the numerous phone calls that were needed.  They both pitched in and offered me assistance every time.

Obviously, I have the highest regard for these two people, not just as building professionals, but as two people whose kindness, dedication and support to their customers is without equal.  I have not met two people who could be better examples of the ideal business representatives.  They unselfishly gave so much to me to help me accomplish my dream and I am eternally grateful to them.  I hope that the Lindal Cedar Home Company realizes how good these people are at their job and how well they represent your company.