As you know, we love our beautiful Lindal home. It has turned out to be everything we could have dreamed of, and more. Visitors often stop to take a breath the first time they walk through the front door as they try to take in all of the beautiful structure and the views out through all of the windows.

I want to share with you one of the totally unexpected surprises we got after we moved in. While construction was going on, I asked the installer of the alarm system and the cable TV what it would cost to add wiring for a speaker system for a stereo throughout the house so we could enjoy music everywhere. He looked around at all of the windows, the cedar lined ceiling and the hardware floors and said it wouldn’t be too much but he said he wouldn’t do it for us. What? Why? He pointed out the open spaces and all of the angled, hard surfaces throughout the house and said the first time we turned on the music we would hate him. He said echoes from all of the hard surfaces and windows would distort the music so bad that it would be awful. And he said that there was nothing he could do to fix it. How sad, but he sounded very sure.

As it turned out, he was almost right.

Just before we closed on the house I was going around checking out all of the systems. I didn’t have a lamp to check the electrical outlets and switches, so I used a little portable radio that I had brought along to listen to a ballgame. As I went around the house I realized that the contractor was right. The echoes were annoying.

One outlet is in the floor right in the point of the prow. I put it there to plug in Christmas tree lights. As I plugged in the radio, I immediately noticed the good quality of the sound coming from the radio. I walked all around the house and discovered the sound carried beautifully throughout the house without echoes. What a wonderful surprise. And although the decorators have hated it, we have a beautiful, small table with a Bose radio right in the prow and the music is wonderful! 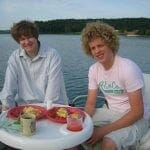 That would be a nice story about an unexpected surprise but it doesn’t end there. Each summer, the Innsbrook Institute is held here at Innsbrook. It is a weeklong music fest with members of the St. Louis Symphony teaching young students during the day with a concert every night by the symphony and student musicians. Similar music fests are held elsewhere in the country, such as Aspen, Colorado, but one of the unique features here, according to the students, is that the musicians and students stay in our homes. We feed them breakfast, get them to their lessons each morning and bring them home each night.

These are the students who stayed with us this year enjoying breakfast on our lake, Tim Eshing and Jeff Spangler. The first year, one of our students was awed by our house and by Helga’s cooking and asked if he could bring a couple of his friends over one night to see where he was staying. I said to make sure they had permission and be sure that they brought their instruments so we could hear them play. Two nights later after the evening concert, a car pulled up with six students carrying their violins and cellos. They came in and were sufficiently impressed by the house and the goodies Helga had baked for them. When they started playing, I was amazed at how gifted these young musicians were and how much they enjoyed their music. One young man in particular, Sean Riley, a violinist who is now studying at The Juilliard School, played a stunning portion of the solo he had played the night before. After he finished, I asked him what he thought of the acoustics in our house. He said he wouldn’t want to practice here! I was shocked until he explained that the acoustics were better than he had ever heard, including concert theaters, and it made him sound better to himself than he new he was! But he asked to stay with us the next year. 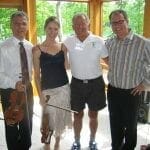 This is a picture taken after this years’ concert with David Halen, Heidi Harris, Ed Boyce, the founder of Innsbrook, and Eric Harris standing in our prow.

The students apparently spread the word about our house and its acoustics and Innsbrook now includes a concert in our house during the Institute featuring selected Symphony musicians. This year, David Halen, St. Louis Symphony Concert Master, Heidi Harris, Assistant Concert Master, and Eric Harris, Principal Bassist and guitarist played a fabulous violin and guitar concert to sixty Institute sponsors.

You might say that the acoustics in our house were more than a pleasant surprise, nearly legendary may be more appropriate.