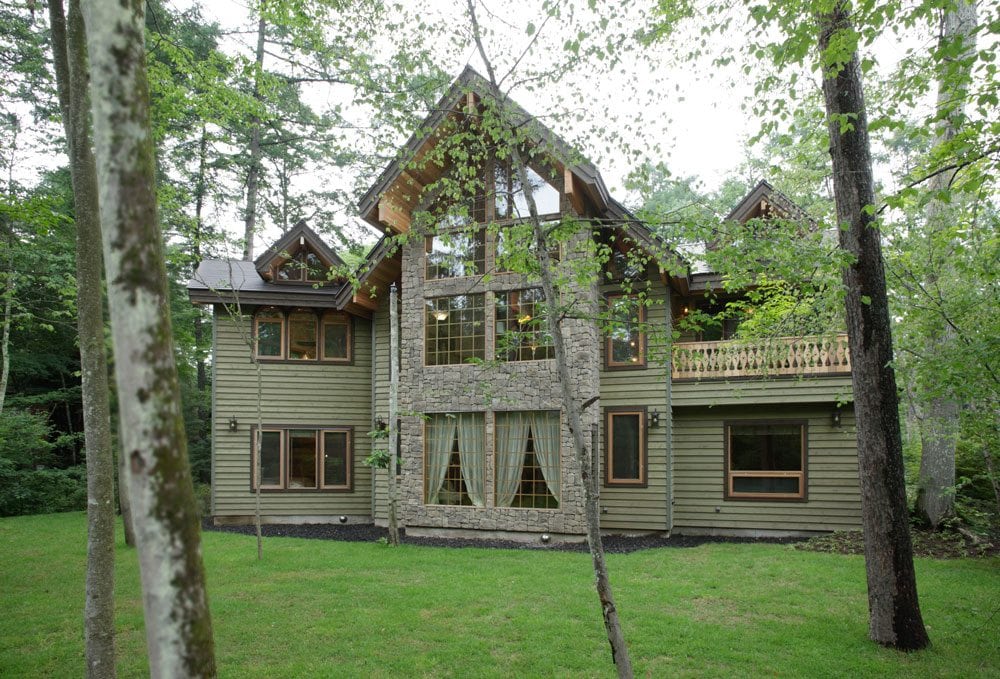 The Lindal Home of the Hayashi family in Karuizawa, Japan.

Lindal Houses for Work, Play, and Every Day

Yuki Hayashi, president of the Osato Research Institute (ORI) in Gifu, Japan, is a longtime Lindal fan. Since 1998, he and his wife, Toshi, have built three Lindal homes. A fourth is in the planning stages. As strong as his enthusiasm for Lindal homes is  Mr.Hayashi’s love of vintage British cars. He has ‘accessorized’ each of his Lindal residences with a fully restored vintage car to match. 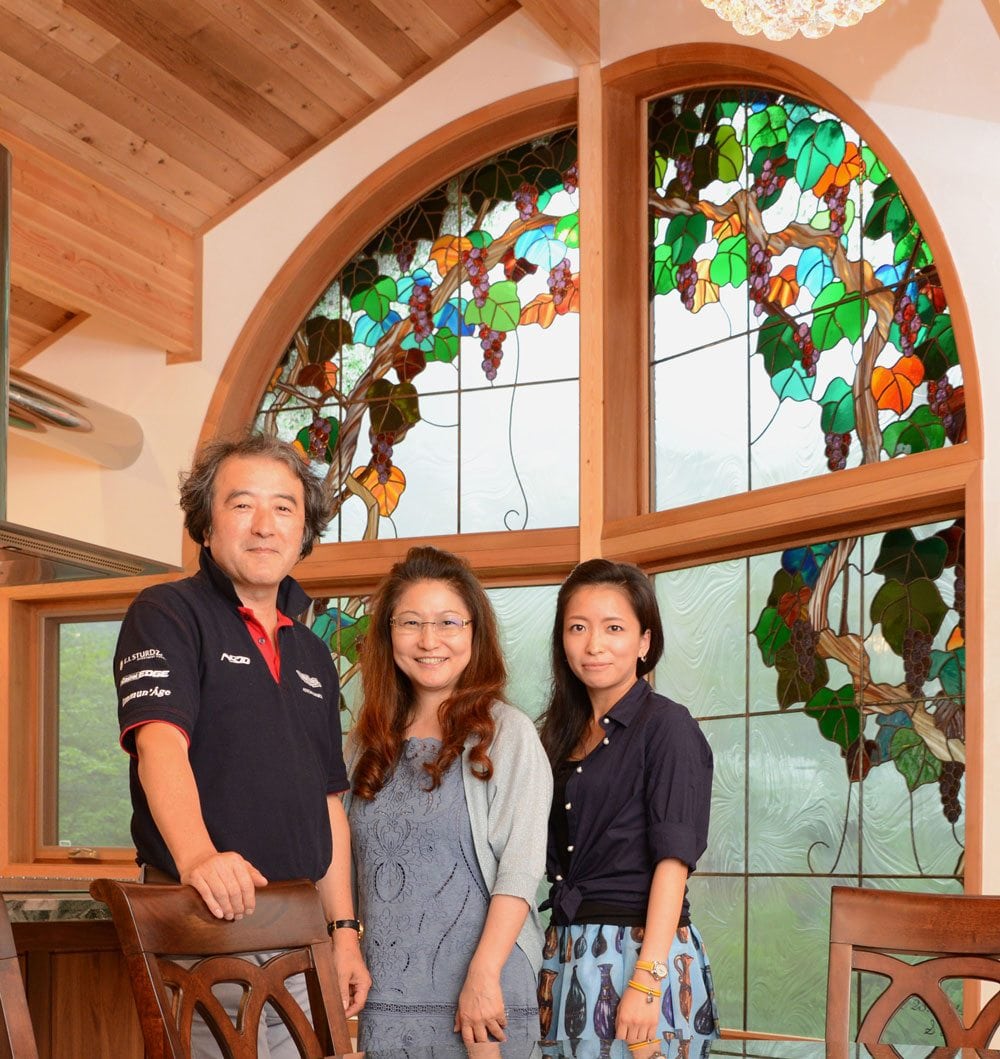 Yuki and Toshi Hayashi with one of their daughters at their vacation villa. The Hayashi’s have a son and two daughters.

In 1998, Mr. Hayashi worked with Lindal’s Tokyo, Japan, dealer, Harry Horiuchi of Lindal Cedar Homes K.K., to build the headquarters of the Osato Research Institute. The institute conducts research and performs clinical trials on the efficacy of a papaya-derived formula in the prevention of cognitive disease in older Japanese adults.

Harry Horiuchi has worked with Lindal as an independent dealer in Japan since 1983. He explained that although Lindal is not a household name in his country, its reputation for quality is what drew the Hayashis to the company.

“The world class, excellent quality of Lindal is what caught Mr. Hayashi’s eye,” Mr. Horiuchi said. “Most of our Japanese customers feel the same way. They are well-educated and experienced people. They aren’t attracted to the modern homes built with cheap materials that are sold by the giant companies in Japan. Clients like Mr. and Mrs. Hayashi want to build a genuine, long-lasting, and comfortable house for their family.”

Given the number of earthquakes and other natural disasters in Japan, Mr. Horiuchi said, Lindal’s Lifetime Structural Warranty was also a big draw. 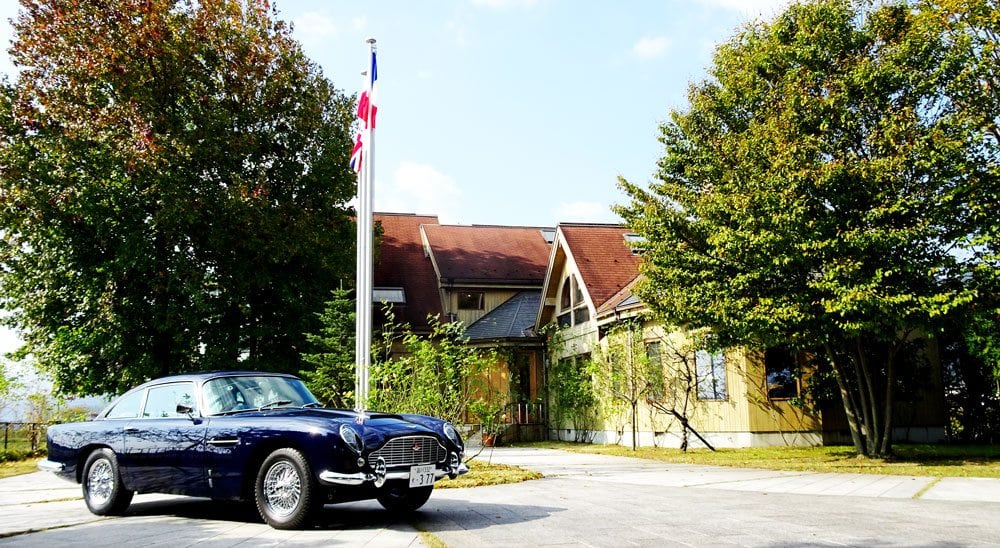 The headquarters of The Osato Institute. Mr. Hayashi’s vintage Aston Martin is parked on the circular driveway. This 1964 Aston Martin DB5 is the same model driven by James Bond in the 1964 film, “GoldenEye” — minus the pop-out gun barrels behind the front indicators and the bullet shield behind the rear window! The vehicle was restored at the Aston Martin Factory in 2012. The Osato Research Institute is a customized Lindal Casa, from the classic home line, as seen in the Lindal Living Dreams plan book.

Mr. and Mrs. Hayashi live in a beautiful Lindal home close to his office. The home, a custom design created by Toshi, is built in the French Provincial style. The home includes a traditional Japanese tea room. 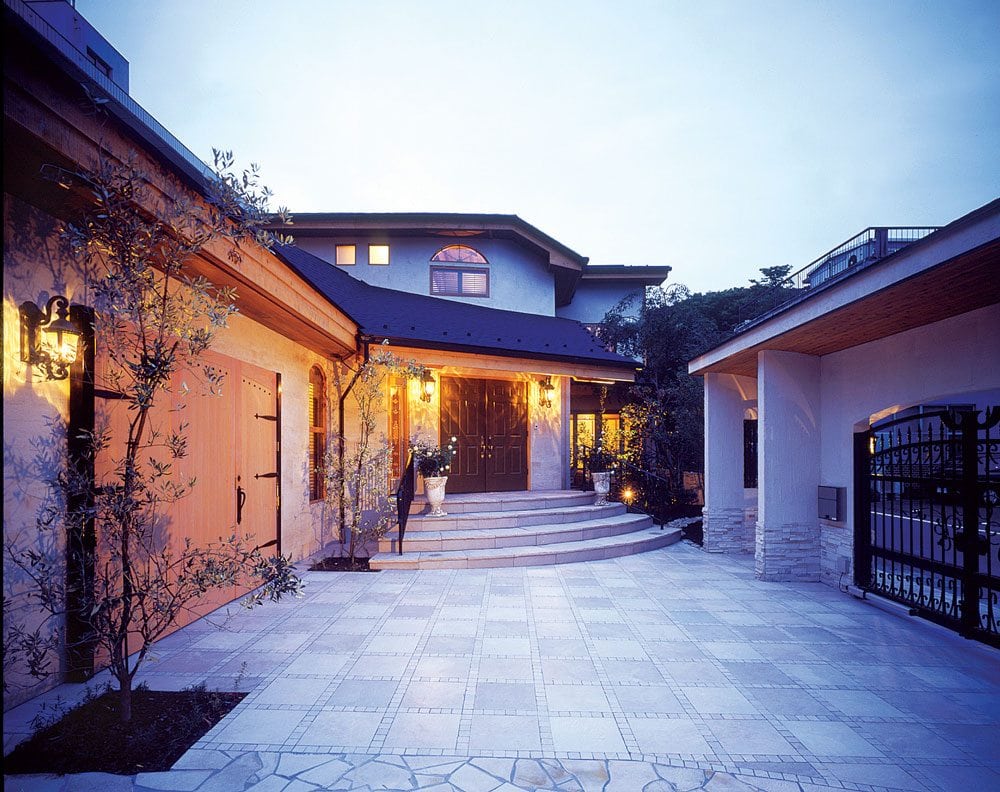 The entry to the Hayashi family’s primary residence. 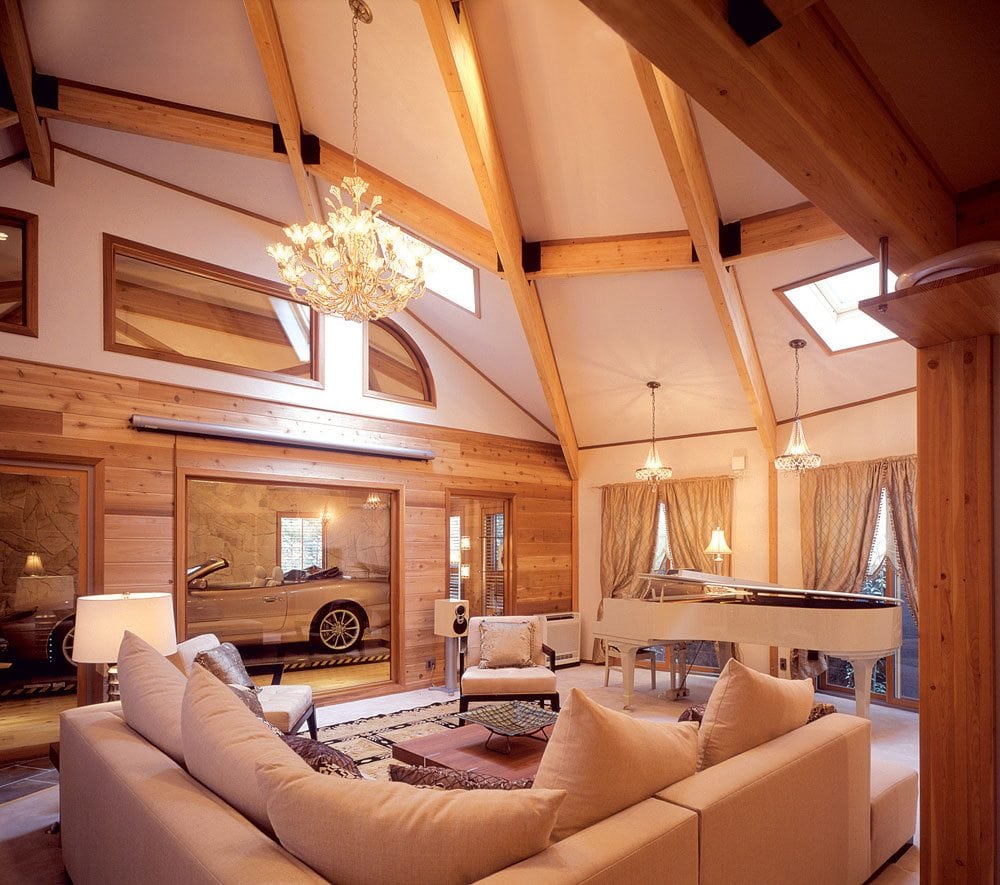 Full-length glass windows in the living room showcase the car in the garage. Mrs. Hayashi is an accomplished piano player who studied at the University of Music and Performing Arts in Vienna, Austria.

The Hayashi’s vacation villa, built in 2012, is located in Karuizawa, a fashionable resort town in the mountains near Nagano, Japan. The town is a popular summer retreat for Japan’s elite businesspeople, politicians, and celebrities. An hour by bullet train from Tokyo, the area features miles of forested land with cycling and walking trails, as well as several golf courses. In the winter, residents enjoy natural hot springs and skiing in the nearby mountains. The Hayashi’s home is next door to the summer home of the imperial royal family of Japan. Bill Gates also has an estate in the area. 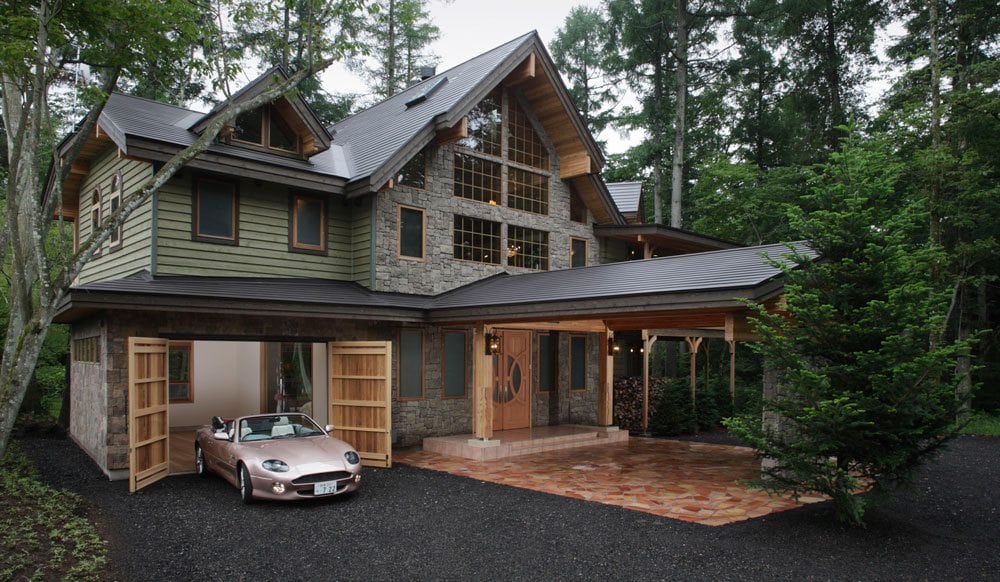 The Karuizawa residence is a custom Chalet Star Lindal home, built in the British manor style. 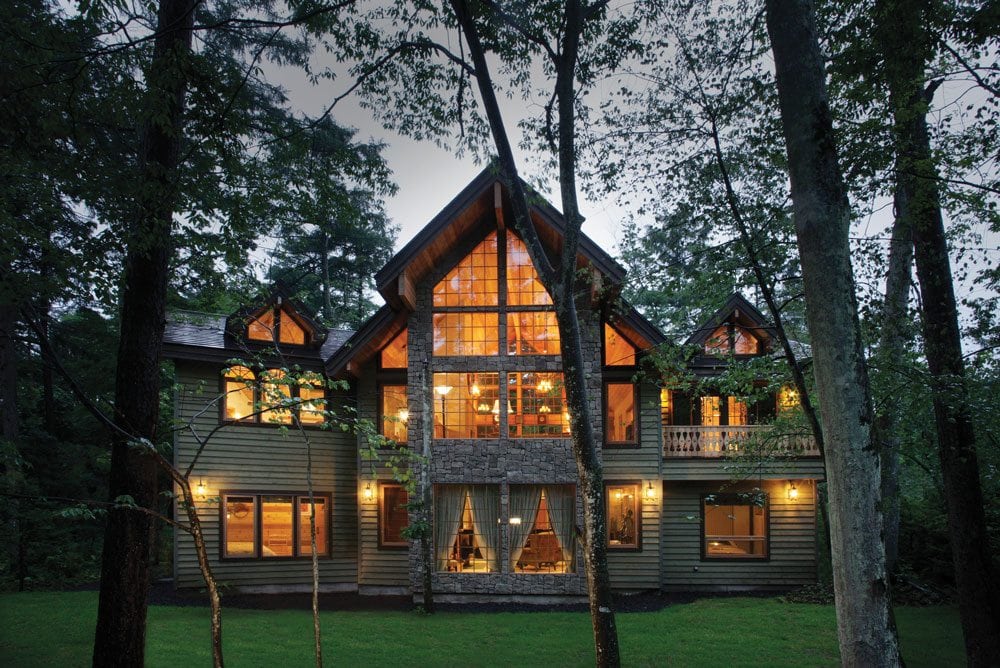 At night, the home glows with interior light. 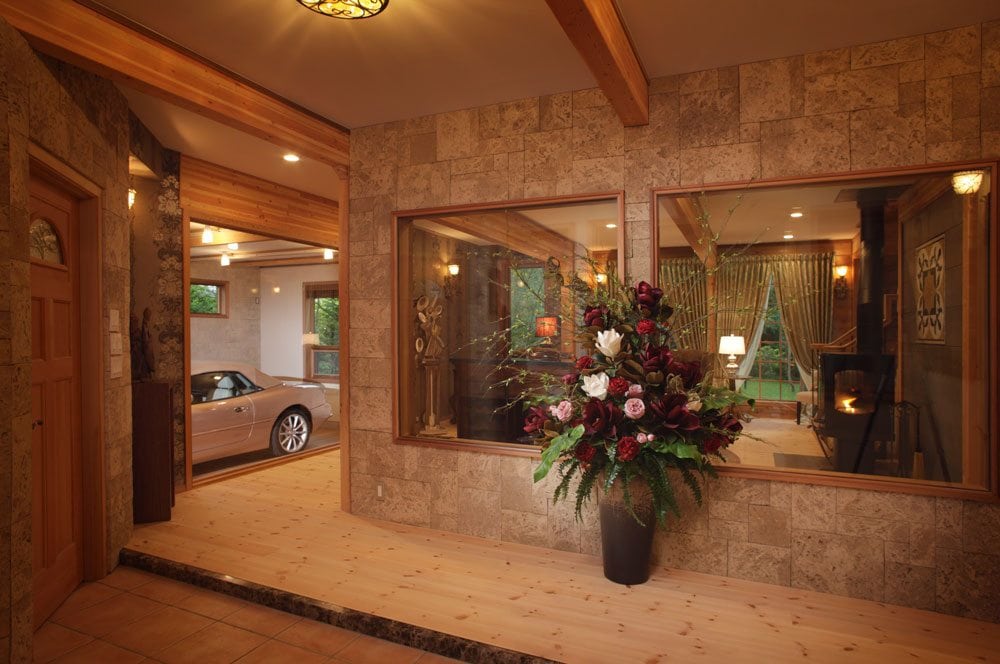 In both the city house and at the Hayashi’s villa, the garage can be seen from inside the house through large picture windows. Pictured here: The view from the home’s foyer into the garage and lower level living room. 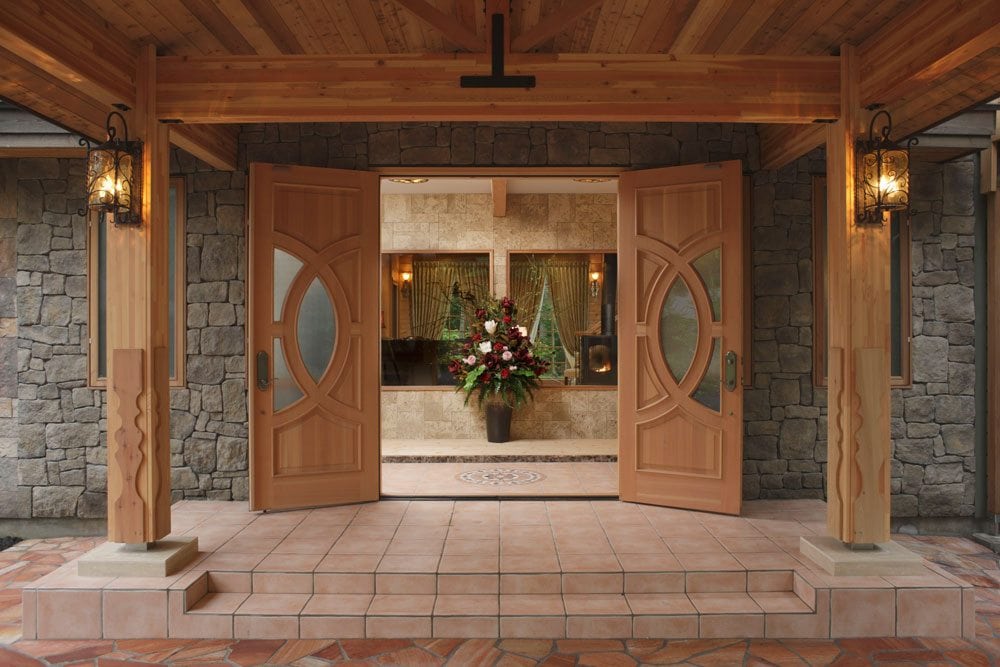 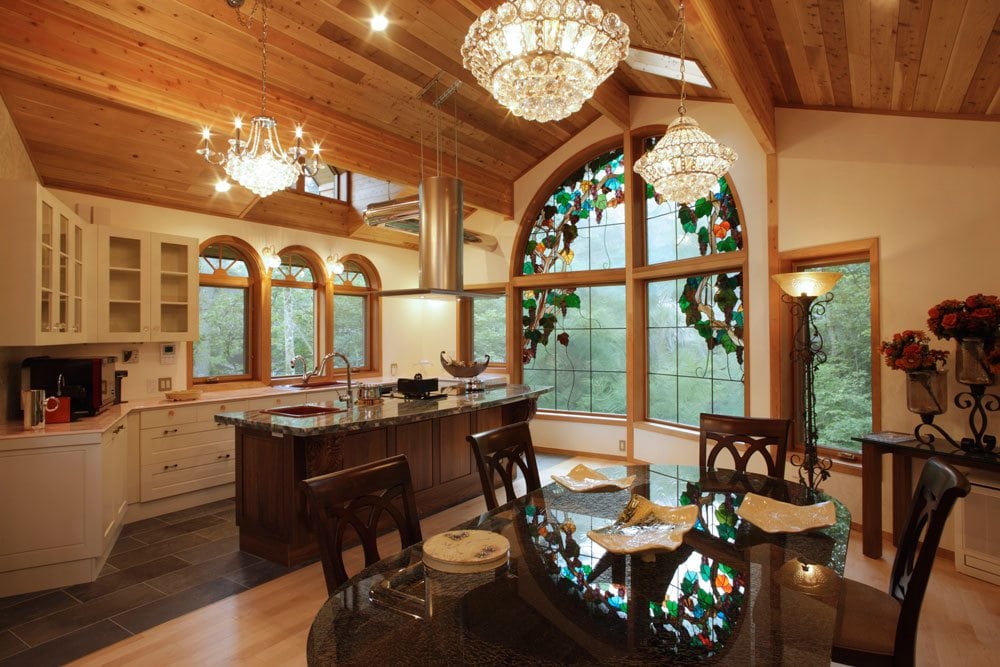 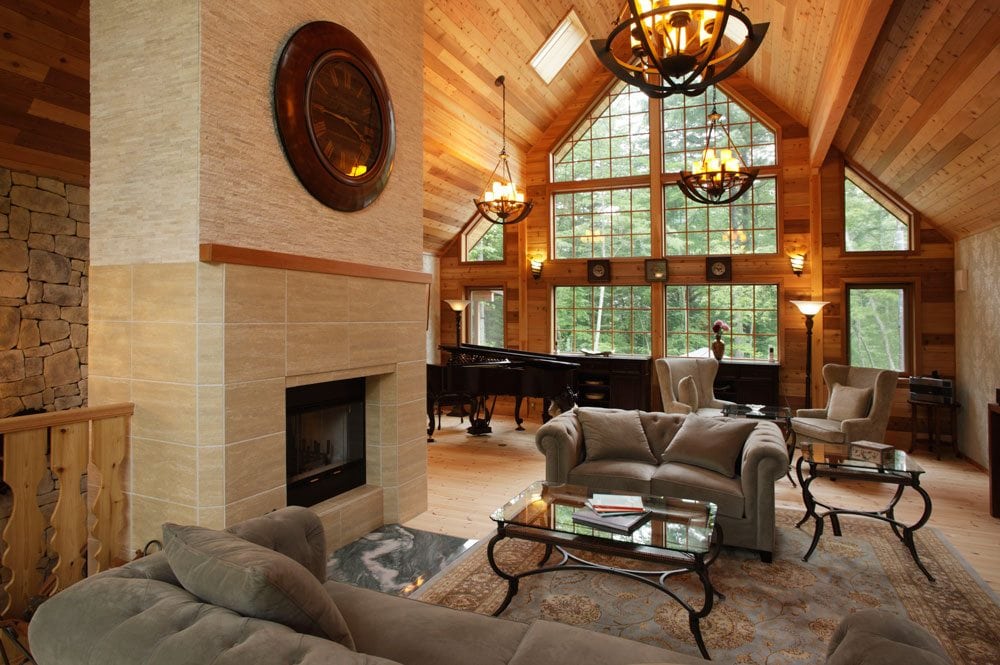 The Steinway grand piano dates from the 1940s and was imported from Germany. Large, chalet-style windows fill the room with natural light. 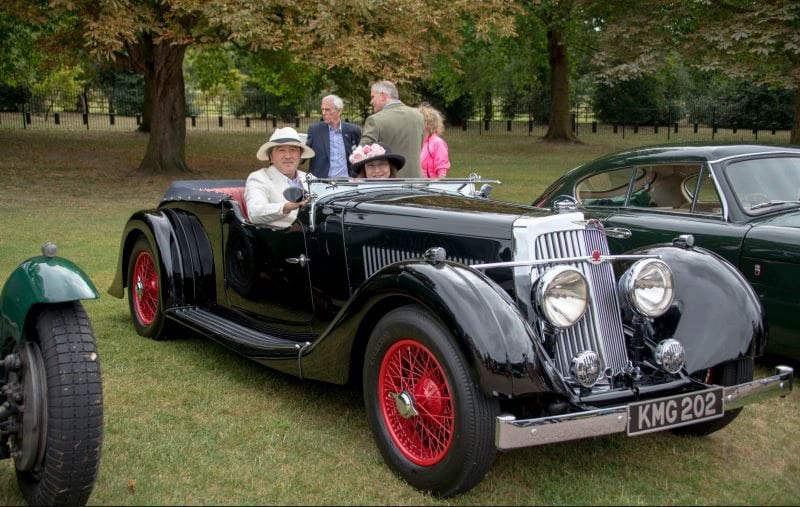 The Hayashis participated in the Concours of Elegance 2016 at Windsor Castle in the U.K. They drove their vintage Aston Martin (the 1937 Aston Martin 15/98 tourer, pictured above), and attended the private dinner of Queen Elizabeth with Prince Kent. This car is Hayashi’s vehicle of choice for jaunts to his British manor-style Lindal home in Karuizawa, Japan. 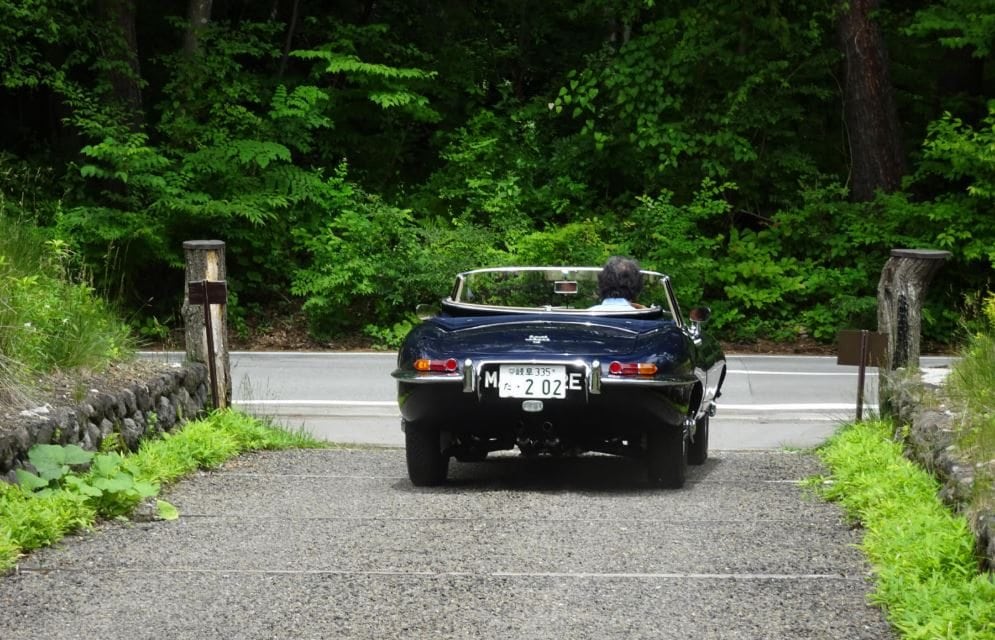 Yuki takes the convertible out for a spin on the streets of Karuizawa.

Mr. Hayashi recently decided to try his hand at wine growing for the elderly society of Japan. He started a vineyard. Future plans include building a French Chateau style Lindal on location.
“Building a house is often a once in a lifetime event,” Mr. Hayashi said. “Each time, it was a very important event for me, my wife, and our family. I think Sir Walter Lindal [1919-2011] paid attention to the mission of his company. Lindal is still committed to making people’s dreams come true.”