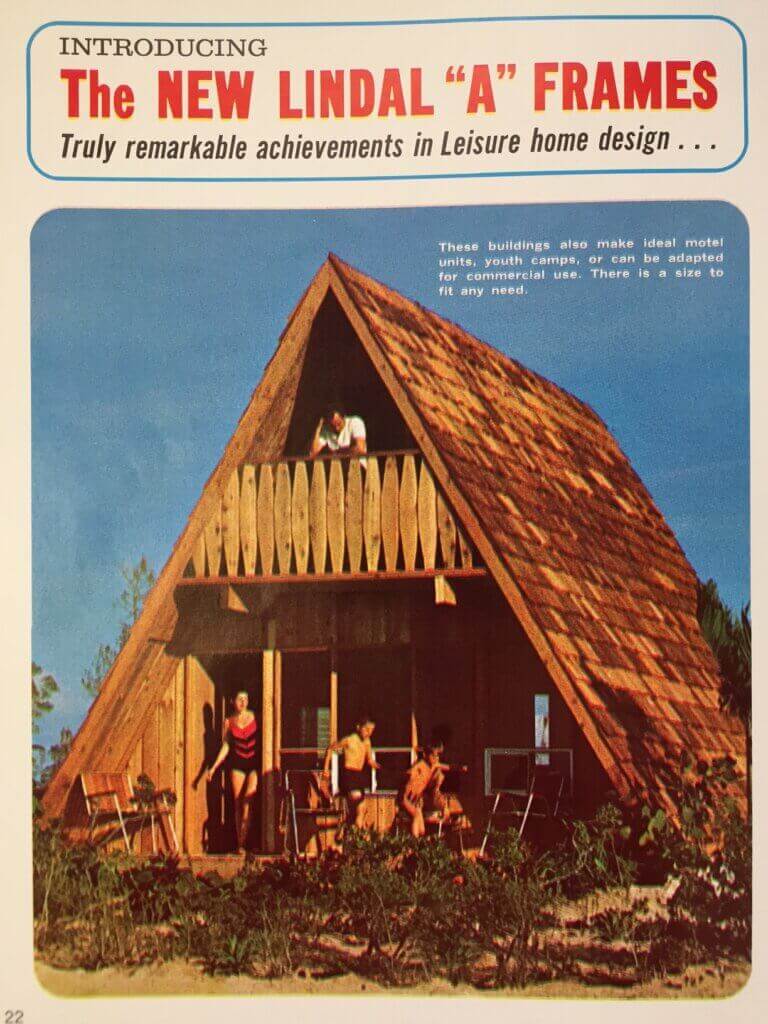 The A-frame house is an architectural building style composed of a sharply pitched roofline that begins at or near the foundation and forms the distinctive letter ‘A’ shape of the home. Because they are relatively easy and inexpensive to build, a-frame house plans are a popular option for do-it-yourself homeowners. In addition, many people choose to build an a-frame as a vacation home.

the evolution of the lindal a-Frame house

The rise in popularity of the A-frame coincided with the founding and growth of Lindal Cedar Homes during the economic boom that followed the end of WWII. Families who found themselves with disposable income for the first time flocked to buy land in vacation and resort areas and eagerly browsed through Lindal’s house plan books – which at the time featured a variety of A-frame floor plans – to find an A-frame kit they could build on their property. 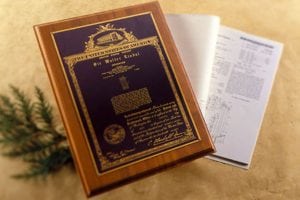 Lindal founder Sir Walter Lindal was fascinated by the A-frame and even patented his own proprietary A-frame house plan in 1968.

A-frames reached the height of their popularity in the 1960s, and accounted for a good amount of Lindal Cedar Homes’ sales at the time, particularly in resort and vacation areas. Lindal’s post and beam system and extensive use of cedar and other wood as building materials was ideally suited to the look and feel of an A-frame house. 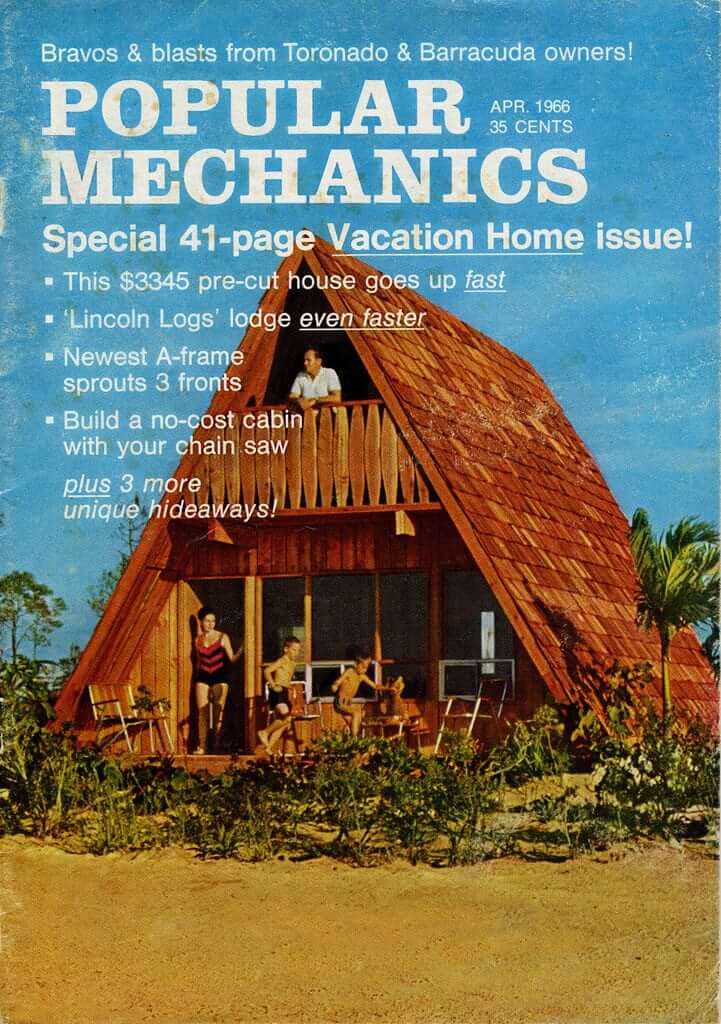 This patented Lindal A-frame home was featured on the cover of the 1966 issue of Popular Mechanics.

While A-frame house plans were, and still are, hugely popular, the reality is that living in a home with steeply pitched walls isn’t always the most practical way to function in everyday life. Furniture cannot be placed along the sides of the house without losing precious floor space, and upstairs loft areas, while quaint, leave little headroom unless you stand right under the peak of the roof! 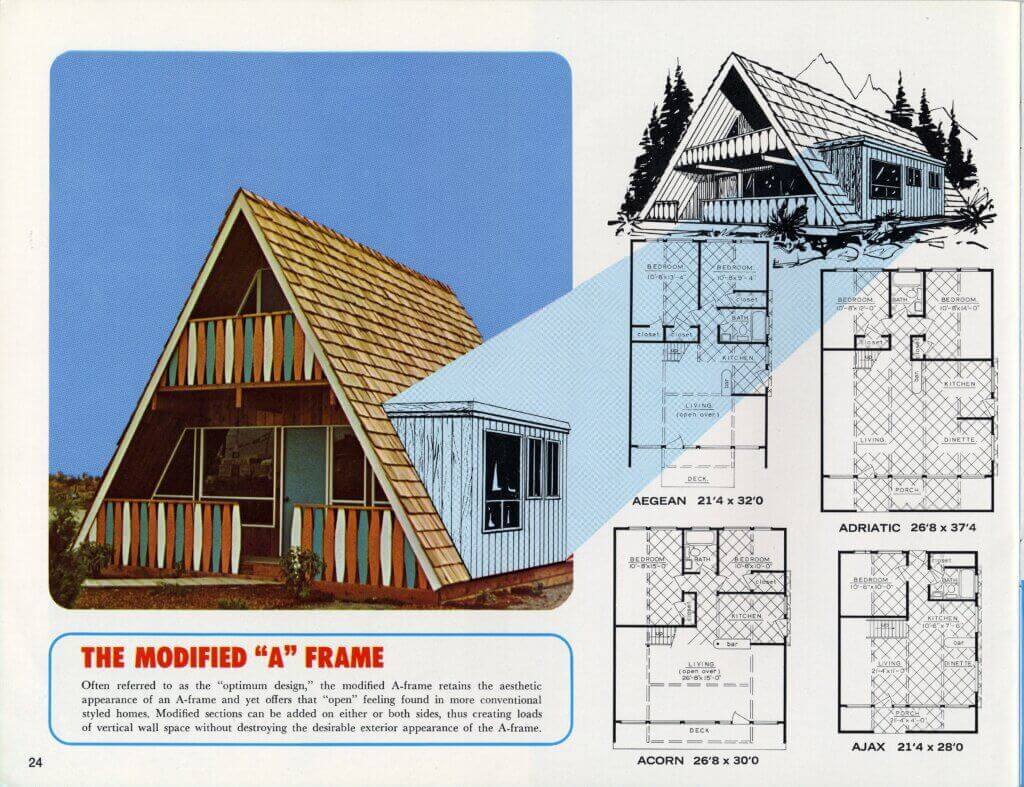 The caption under this design from Lindal’s 1967 plan book reads: “Often referred to as the “optimum design,” the modified A-frame retains the aesthetic appearance of an A-frame and yet offers that “open” feeling found in more conventional styles homes. Modified sections can be added on either or both sides, thus creating loads of vertical wall space without destroying the desirable exterior appearance of the A-frame.”

In these home designs, the A-frame was modified with small ‘bump-outs’ on one or more sides that did indeed allow for some vertical wall space and increased the livable space in the home. 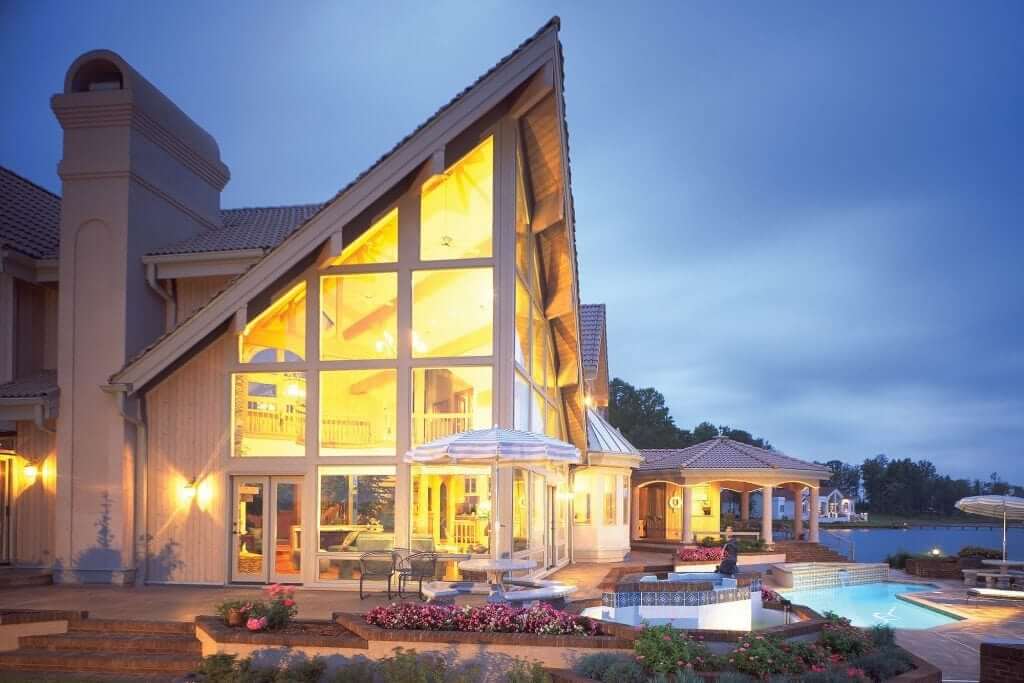 Lindal’s classic home styles – in particular the prow series – borrow a great deal from the vernacular of the original A-frame house plans. These homes all feature a pitched roofline and a wall of windows on the view side of the house that juts out like the prow of a ship. However, the prow front classic homes are made larger and more practical by the addition of wings on either side for the bedrooms, bathrooms, offices and other more private areas of the home. Also, the roofline, while still dramatic, starts higher up on the home rather than rising directly from the foundation. The large area in the center of Lindal classic prow homes usually consists of a great room containing the living room, dining area, and kitchen, with a loft area above that looks down over the great room and also out to the view.

Lindal’s line of modern homes, now called the Lindal Elements home style, was originally named the Modern A-Frame, borrowing from Lindal’s legacy of innovation and success in the field of modern home design. It was later renamed Lindal Elements, and features homes with a variety of styles and rooflines, from flat to pitched, all designed within the parameters of a vertical and horizontal grid designed by Lindal.

The designers of the new Modern A Frame invite you to an introduction of a reborn classic. The new Modern A-Frame may not look a lot like the original, patented by Sir Walter Lindal in the 1960s, but its spirit lives in this fresh and inspired new family of Lindal designs.

Attend our free webinar to learn about the development of the Modern A-frame; how the disciplined use of the classic Lindal building system simplifies the design, personalization, and construction of these houses without ever sacrificing material quality.

See how the Modern A frame building blocks enable every Modern A-frame to adapt to its site conditions : the path of the sun, the terrain, and the need for privacy. See how the building blocks easily transform each floor plan into an amazing variety of very different houses, ready for your personalization.

This is an ideal program for an aspiring homeowner who wants an efficient planning process, a fresh smart house and the simplicity of a modernist lifestyle warmed by wood.

After the presentation, there will be a question-and-answer period, during which you can linger and explore the Modern A-Frame with our talented design pros.