Stories For a Texas Builder, a Dream Home of His Own

Most images by Brent Humphreys for the Wall Street Journal. Carport image by Patrick Barta for Lindal Cedar Homes.

Visitors to Jeff Derebery’s home in rural Texas are often surprised by the 12-foot, glow-in-the-dark square nestled among the trees on the riverfront property. 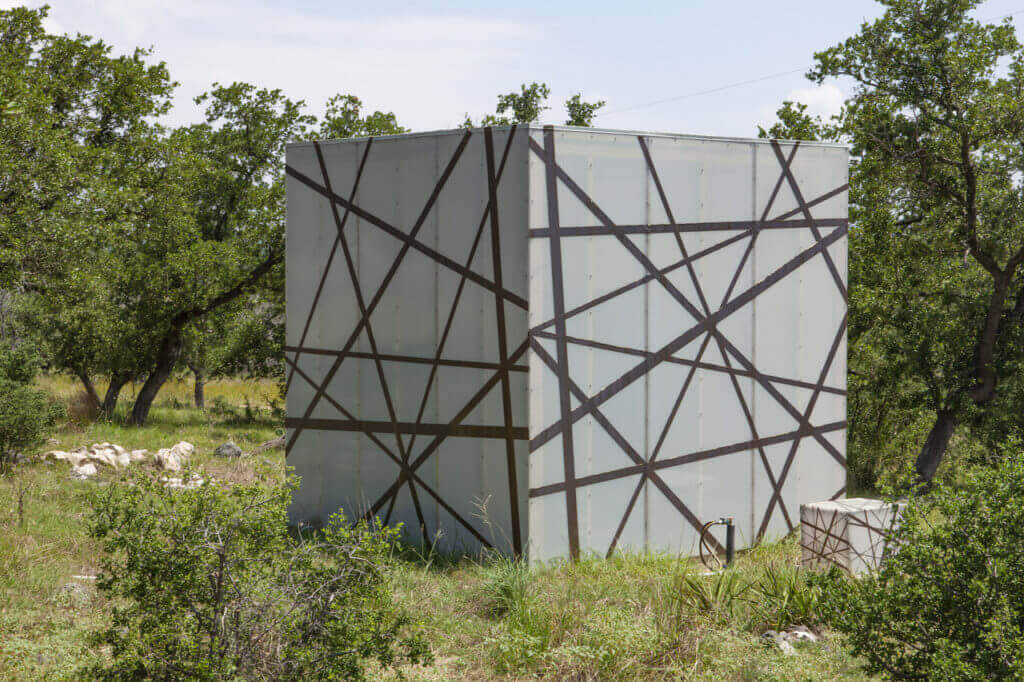 “Cubie,” a glow-in-the-dark cube made from polycarbonate panels, conceals a holding tank for the property’s well. The well head is covered by the smaller “Cubie 2,” which glows red at night.

“Cubie,” as Mr. Derebery calls the white box with copper strips, was built out of polycarbonate panels to conceal a holding tank for the property’s well. Next to Cubie, a well head is covered by “Cubie 2,” a smaller square that glows red.

“I designed them to light up at night and be kind of sculptural elements,” said Mr. Derebery, 63, a home-builder by trade. “They mystify a lot of the locals.” 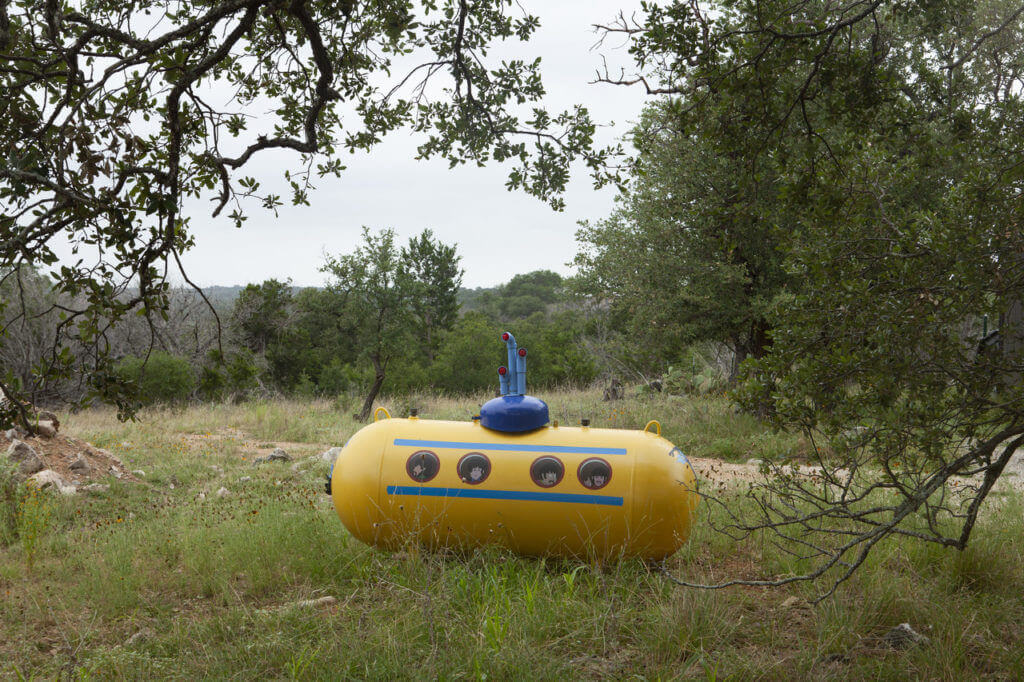 The Cubies are among many playful elements on the 15-acre property of Mr. Derebery and his wife, Janice Fischer. In a nod to the Beatles’ “Yellow Submarine,” an oblong propane tank is painted yellow with the Fab Four peering out of circular windows. A deer feeder is disguised as a giant can of Campbell’s soup, suggesting pop artist Andy Warhol. 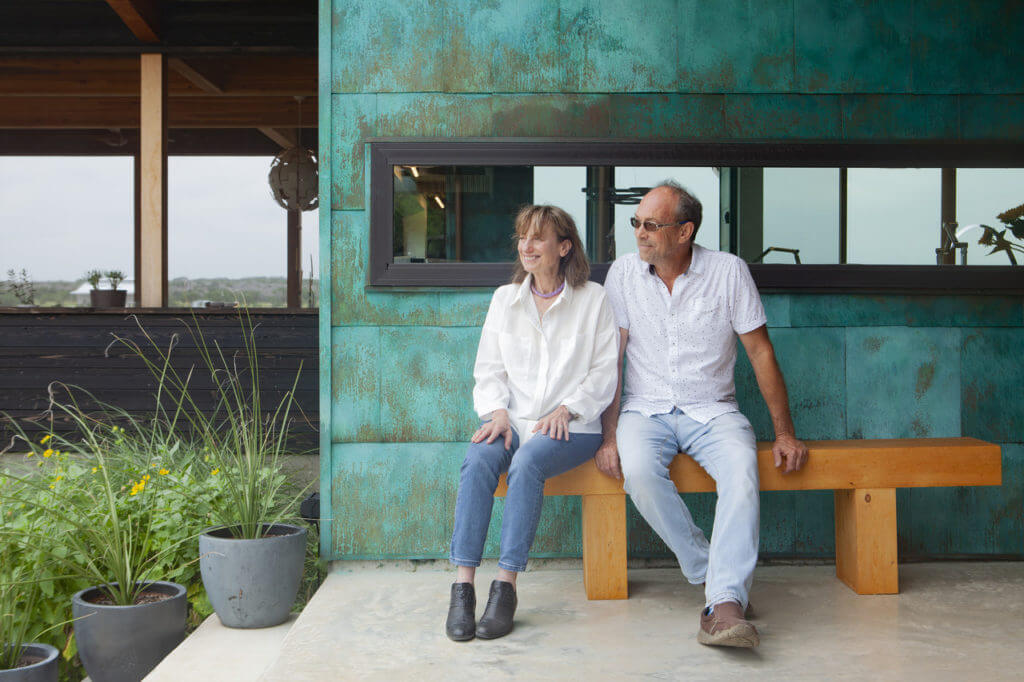 Copper accents on the exterior of the house have a blue-green patina that Mr. Derebery created using, of all things, Miracle-Gro fertilizer.

After years of building homes for other people, Mr. Derebery had a stockpile of ideas he was eager to use for his own dream home. “I’d been working on the design for 15 years,” he said of the recently completed post-and-beam house [Lindal’s Hestia home design by OM Studio] which overlooks the Pedernales River outside Johnson City (population 2,051). 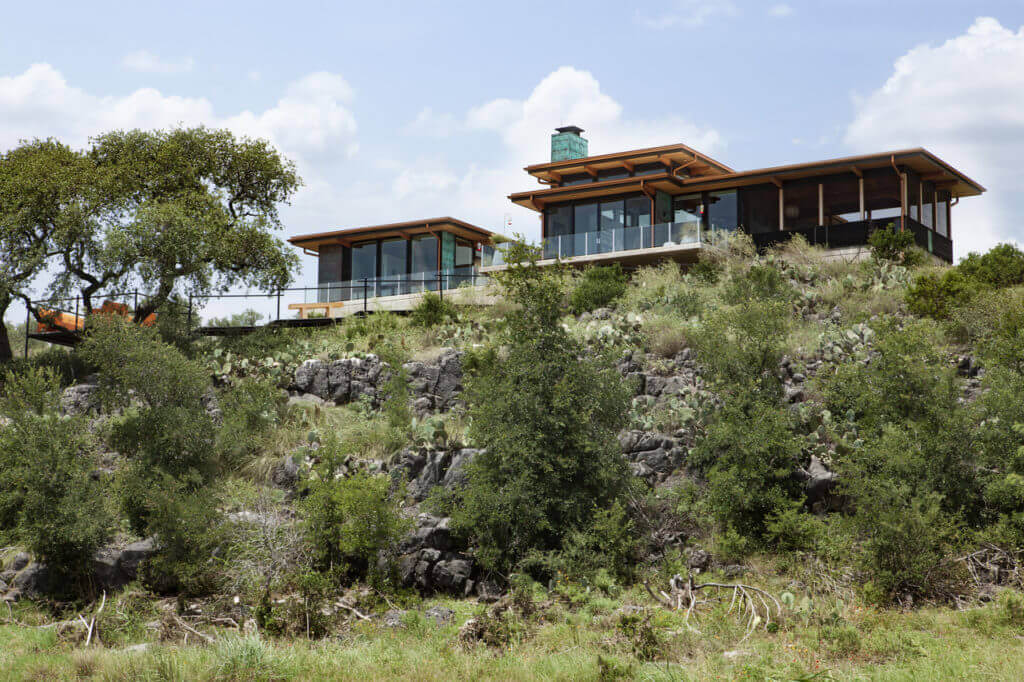 The contemporary, four-bedroom, three-bathroom house, about an hour’s drive west of Austin, is a radical departure from most homes in Texas Hill Country, which 20 years ago was predominantly goat and cattle ranches. “Some people don’t get it, but that’s OK,” said Ms. Fischer. “We wanted to do something different.” 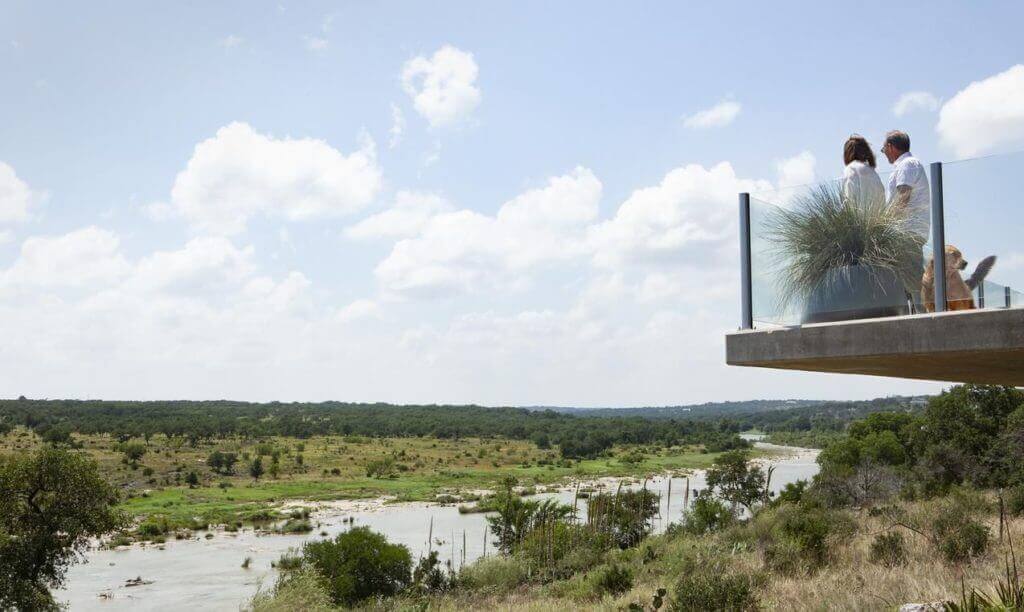 The pair were ready for a change from their previous home in downtown Austin, a carefully restored, 100-year-old Arts and Crafts bungalow where Ms. Fischer had lived for 25 years.

The couple, who both have children from previous relationships, started dating after Ms. Fischer hired Mr. Derebery to repair her home’s windows. Ms. Fischer, originally from New York City, is a genetics professor at the University of Texas at Austin.

They wanted their second home together to be in a more rural setting, but not too far from Austin. Mr. Derebery has moved his business out of Austin, but Ms. Fischer still commutes to the city three days a week. So she was skeptical when he said he found a piece of land about 50 miles from Austin.

“I said, ‘Johnson City? Are you kidding?” But she came around when she saw the lot set on “this gorgeous, gorgeous river.” Riverfront property is a rare find in the Hill Country, Mr. Derebery said.

They sold the Austin house and paid about $275,000 total for two lots of 7.5 acres each. They saved money by having Mr. Derebery act as general contractor on the new build, which took 10 months and cost about $1.5 million, with [design and] materials from Lindal Cedar Homes. The roughly 3,500-square-foot home was completed in 2018.

Mr. Derebery long envisioned living in a single-story home with an interior courtyard, which he said lets in light and makes the house seem bigger. 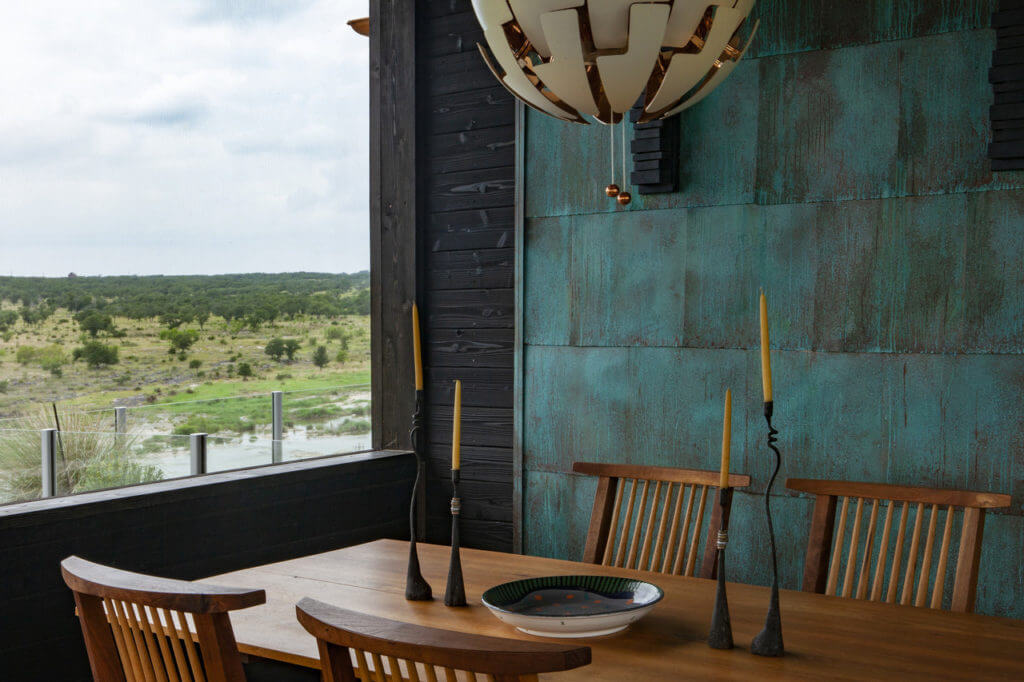 His love of copper as a building material meant an exterior with as many copper elements as he could afford. To turn the copper the blue-green color he wanted, he eschewed expensive commercial patinas for a combination of Miracle-Gro, vinegar and water.

“Every time there’s a big rainstorm it changes a little,” he said. 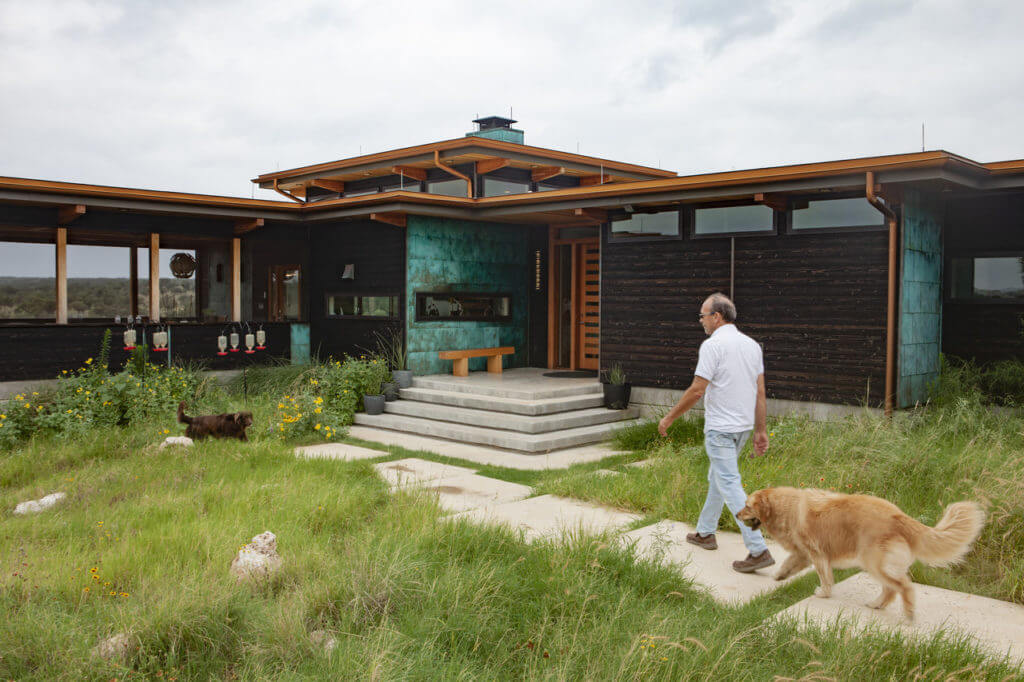 He complemented the copper with charred Japanese cypress siding, allowing the black to contrast with the blues of the patina. His inspiration, he said, was the local environment. “Our native limestone is kind of black, and the river is a kind of turquoise color.” 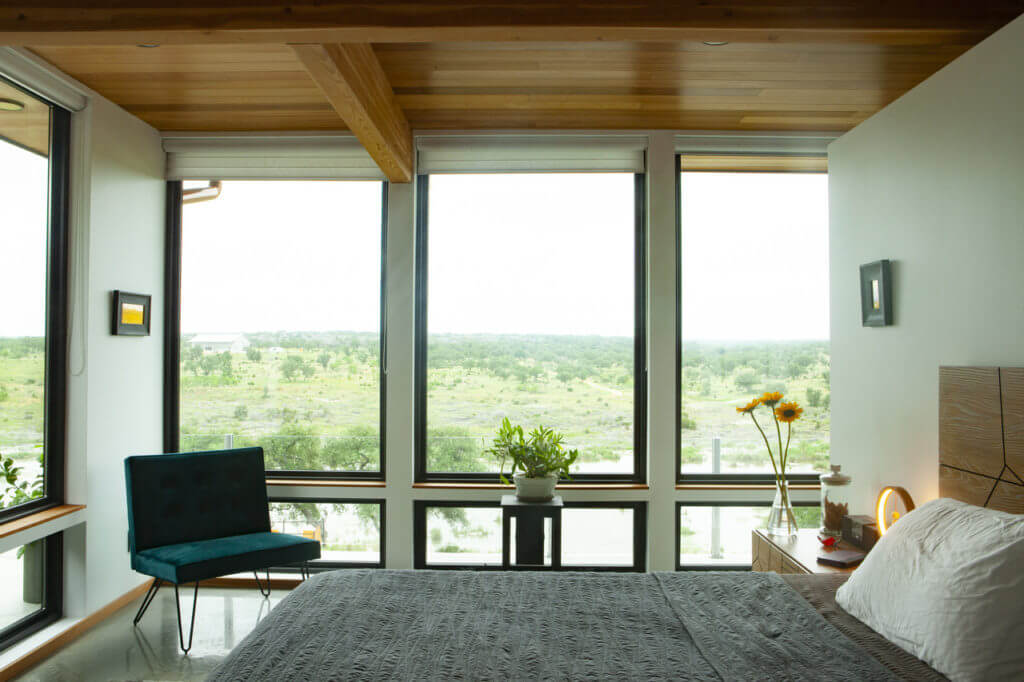 The house has floor-to-ceiling glass windows to take advantage of the river views and let the couple watch bald eagles and ospreys catching fish. 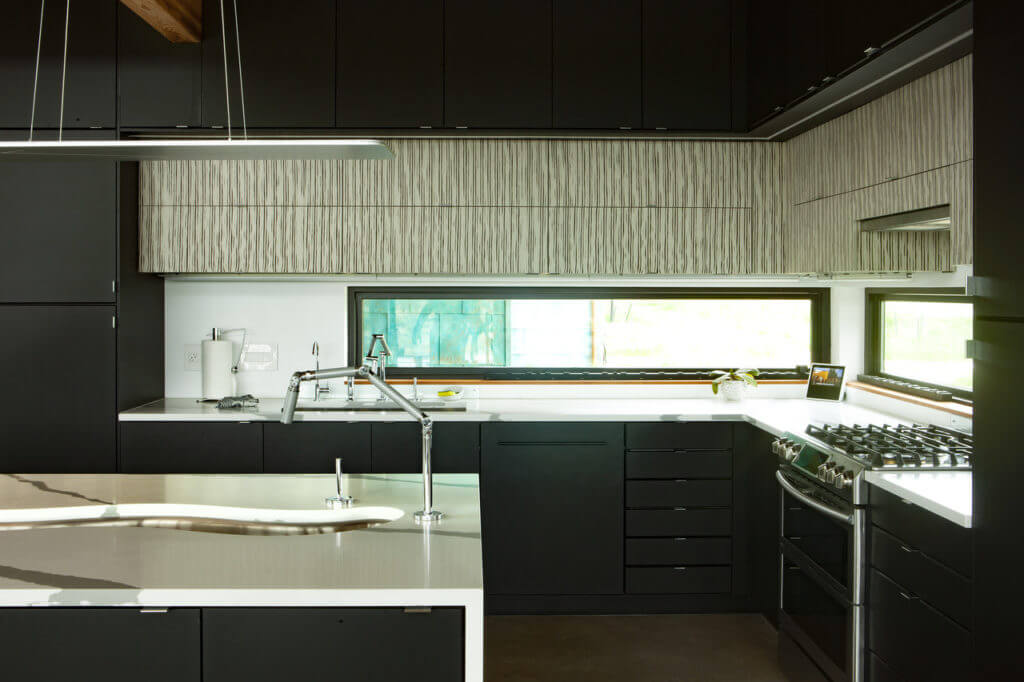 Throughout the house, Mr. Derebery opted for natural materials whenever possible. He also chose finishes such as polished chrome for the bathroom and kitchen fixtures, believing they are less likely to go out of style.

“One thing I’ve learned over the years is that houses get dated very quickly,” he added. To that end, he also installed long, rectangular windows in the kitchen in place of a tile backsplash. 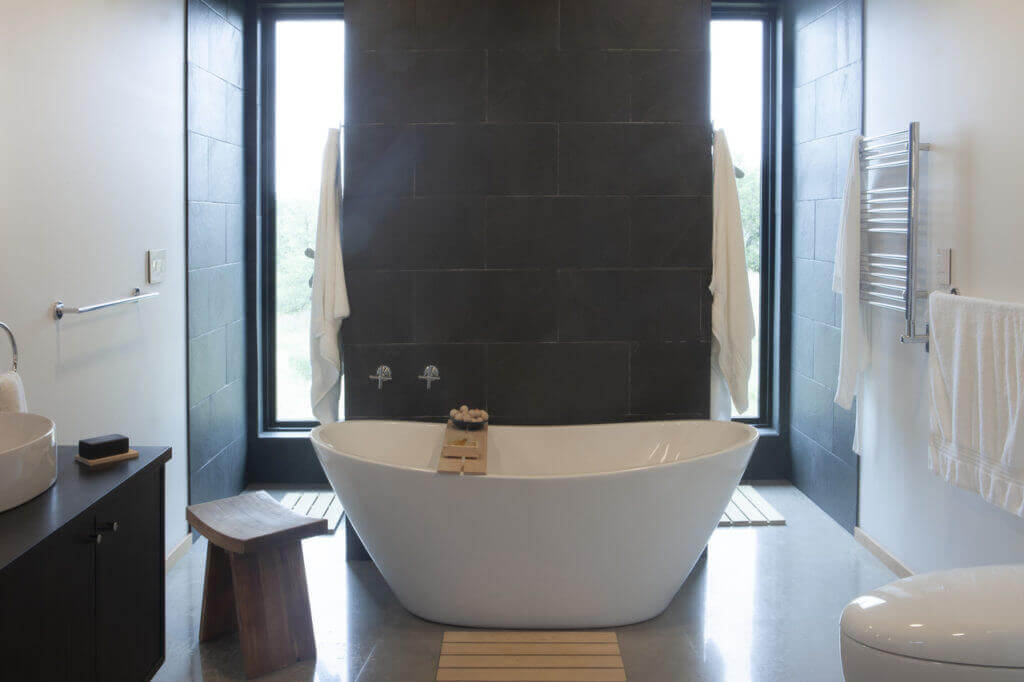 For the floors, they chose diamond-polished concrete. “When the right light hits it, it’s like you’re looking in a mirror,” he said.

The master bedroom and the great room have sliding glass doors that open to the courtyard, a 21-by-32-foot concrete space that serves as the home’s backyard. It was impossible to create a grassy lawn on the property’s rocky soil, studded with basketball-size rocks, cactuses, rattlesnakes and “all kinds of Texas things,” Ms. Fischer said. 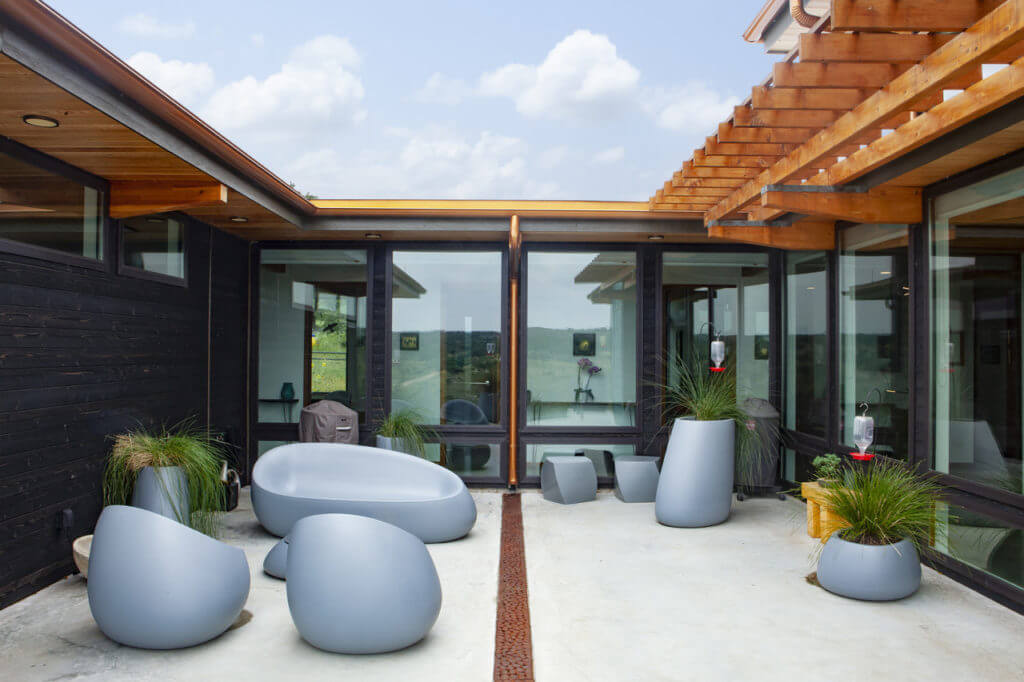 The courtyard’s outdoor furniture is made of recycled plastic by the Spanish company Vondom. While the gray chairs are modern in appearance, they fit in with the rugged landscape in that “they just kind of look like rocks,” Ms. Fischer said.

Outside, concrete balconies are cantilevered over the hillside on either side of the courtyard. A walkway leads from the main house to a sitting area by the river, with bright orange furniture Ms. Fischer chose because it echoes “the color of the sunset.”

She likes to take the couple’s two retrievers, Blue and Ponder, and sometimes their cat, Lewie, with her to the sitting area. “I go down there almost every night and have a glass of wine when I get home from work,” she said. 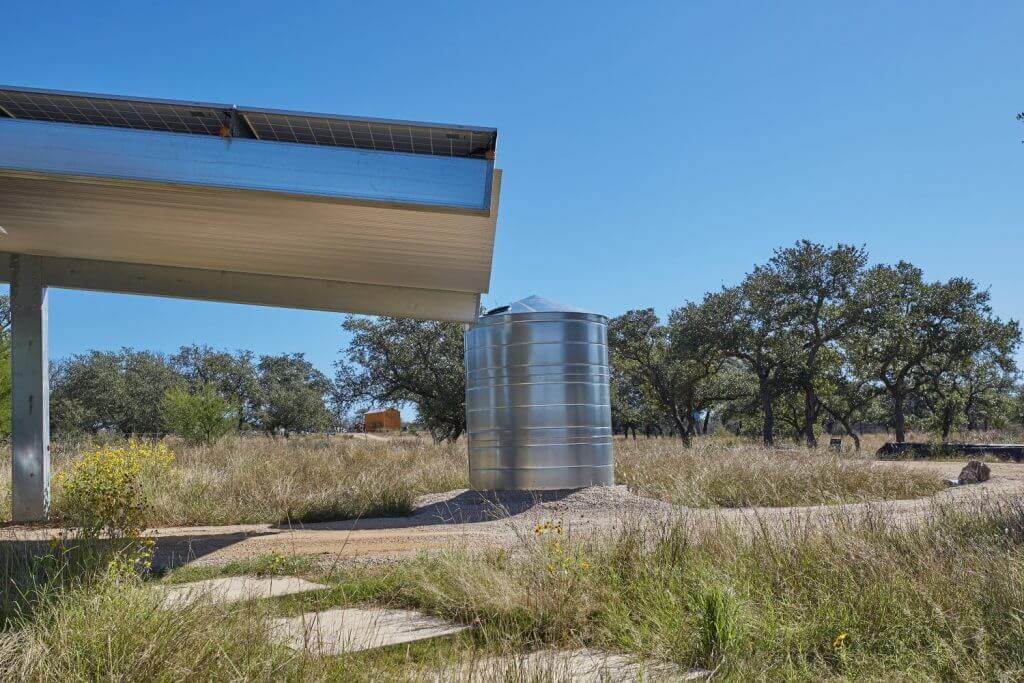 If the inside is natural, the outside is where Mr. Derebery let his creativity run wild. In addition to the Campbell’s Soup deer feeder and the Yellow Submarine propane tank—his way of dressing up industrial-looking objects—the property includes a shiny, silver carport made of galvanized steel. The diagonal roof has solar panels on top for power, and rainwater flows into a water tank for landscaping and fighting fires.

“I love living there,” said Ms. Fischer. “It’s really different. Every day feels like an adventure.”

Originally published in the Feb. 26, 2020 issue of the Wall Street Journal. Link to article here . (Article is behind a firewall)

This Lindal home style is the Hestia, by Aris George of OM Studio Design for Lindal Cedar Homes.

The Lindal dealer on this project was Brent Hughes of Majestic Peaks Custom Homes.