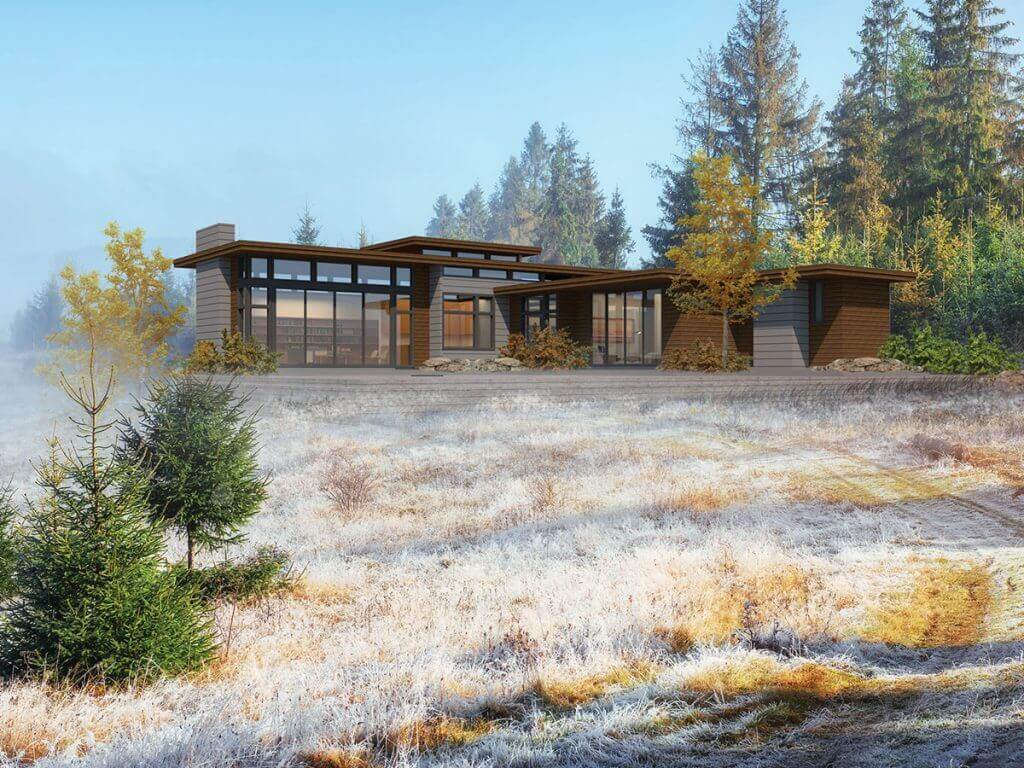 Among the buildings so honored is the Herbert and Katherine Jacobs House (informally referred to as Jacobs 1). Built in 1937, it  is Wright’s first Usonian home design. In 2018, Lindal debuted an updated, re-imagined version of Jacobs 1 – the Madison – which is available for clients to build on their property.

Jacobs 1 is one of the eight Frank Lloyd Wright sites awarded the first-ever modern architecture designation on the world heritage list for the United States. The other Wright buildings include Fallingwater, Hollyhock House, Taliesin, Taliesin West, Unity Temple, the Frederick C. Robie House, and the Solomon R. Guggenheim Museum.

Frank Lloyd Wright’s Usonian homes were based on an idea that was radical for its time: To make cutting-edge modern architectural design principles accessible to the middle class in the form of affordable, mass-produced residential homes. A pioneer in the use of new materials, prefabrication, and modern home design, Frank Lloyd Wright created custom designs for each client, based on their budget and lifestyle. The homes were made with natural materials such as wood and stone, and composed of elements that could be mass-produced for maximum cost-effectiveness. In 1937, the first Usonian home – Jacobs 1 – was built by Wright for Herbert and Katherine Jacobs near Madison, WI. Wright went on to design more than 100 Usonian homes. In the interests of economy, Wright eschewed basements, garages, front porches, and excess ornamentation. The homes, however, are far from drab. Wright played with light and shadow by including beautiful bris soleil (literally “broken sun”) designs against the windows. These created geometric shadows that would expand and contract as light penetrated and withdrew from the communal open spaces of the homes. In addition to providing visual appeal, this technique helped with heating and cooling the homes. (See an example of bris soleil in this video of Hollyhock House.)

The simple yet functional early Usonian homes – with their open floor plans, low-lying profiles, and clean proportions – served as prototypes for the popular ranch style homes that to a large degree defined the residential landscape of post-WWII America.

In 2018, Lindal Cedar Homes – the world’s largest manufacturer of post-and-beam kit homes – partnered with the Frank Lloyd Wright Foundation to resurrect the concept of the Usonian home with its Lindal Imagine Series (LIS). LIS unites the enduring design principles of a Usonian home with current developments in technology, construction and design theory. The homes were designed by Frank Lloyd Wright School of Architecture graduates Aris Georges and Trina Lindal. While several of the designs in the series are original, they are all, in the words of designer Georges, “translations of the original Usonian designs.”

The Lindal Imagine Series Madison home design (left) closely follows the layout of the original Jacobs 1 house (right). It embodies the elements of Usonian design, with a sheltered entryway next to a covered carport, and two “wings” that wrap around a private backyard. All of the rooms have a connection to nature via large glass doors. Light enters even the most interior spaces through clerestory windows that are formed through the use of varying roof elevations. Utility functions are housed in the partial basement. At 1,603 square feet, the Madison embodies Wright’s desire to create small, accessible homes with superlative architecture and an elevated aesthetic. The Lindal Imagine Series homes reflect Wright’s belief that the buildings we live in influence the kinds of people we become.

All LIS home designs are available to build on a client’s private build site. Lindal operates through an international network of independent distributors to provide its home designs and exterior materials packages to clients worldwide. Please contact your local Lindal representative to inquire about building a Usonian-inspired home on your lot.