Projects An Architect-Designed Lindal in the San Juan Islands 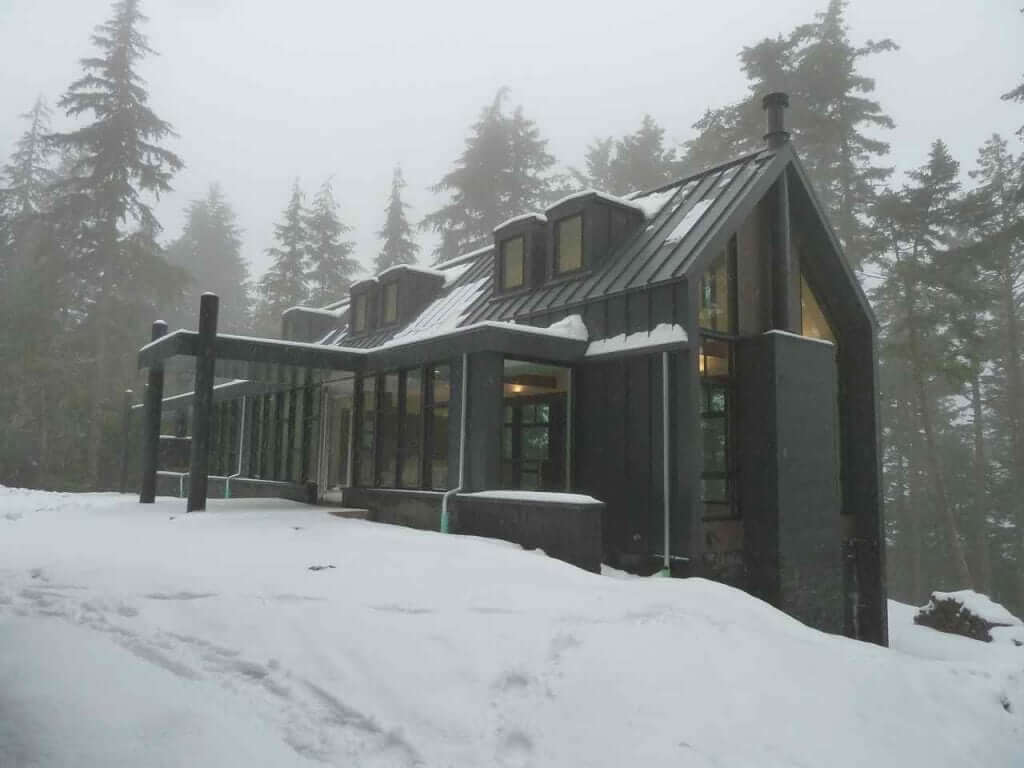 In 1997, Alex and Jens Hanson were given a Lindal Living Dreams plan book for Christmas. After a hard day’s work (she as a nurse, he as a corporate tax attorney), they would sit in the living room of their ornate Italianate home in Orange County, pour a glass of wine, and flip through the glossy pages, dreaming of the day when they would build their Lindal home, far from the stress and urban sprawl of Southern California. They both agreed that the Summit Star Prow, a traditional cedar post-and-beam Lindal with a two-pitched gable roof and dramatic two-story wall of windows, would be the perfect retreat for their future selves.

In 2006, Jens decided it was time to buy land. He started thinking back to his childhood visits to the San Juan Islands north of Seattle, and how peaceful it was there. “I did a lot of research online, and found the perfect spot for us,” he said. Alex, now retired, longed for a quiet, safe and peaceful place to relocate.

They purchased 11 acres of heavily wooded land in the San Juans, 1,600 feet up the side of a mountain, with breathtaking views of the surrounding islands and Cascade mountain range. While they weren’t quite ready to build, they had taken the first step in the process. 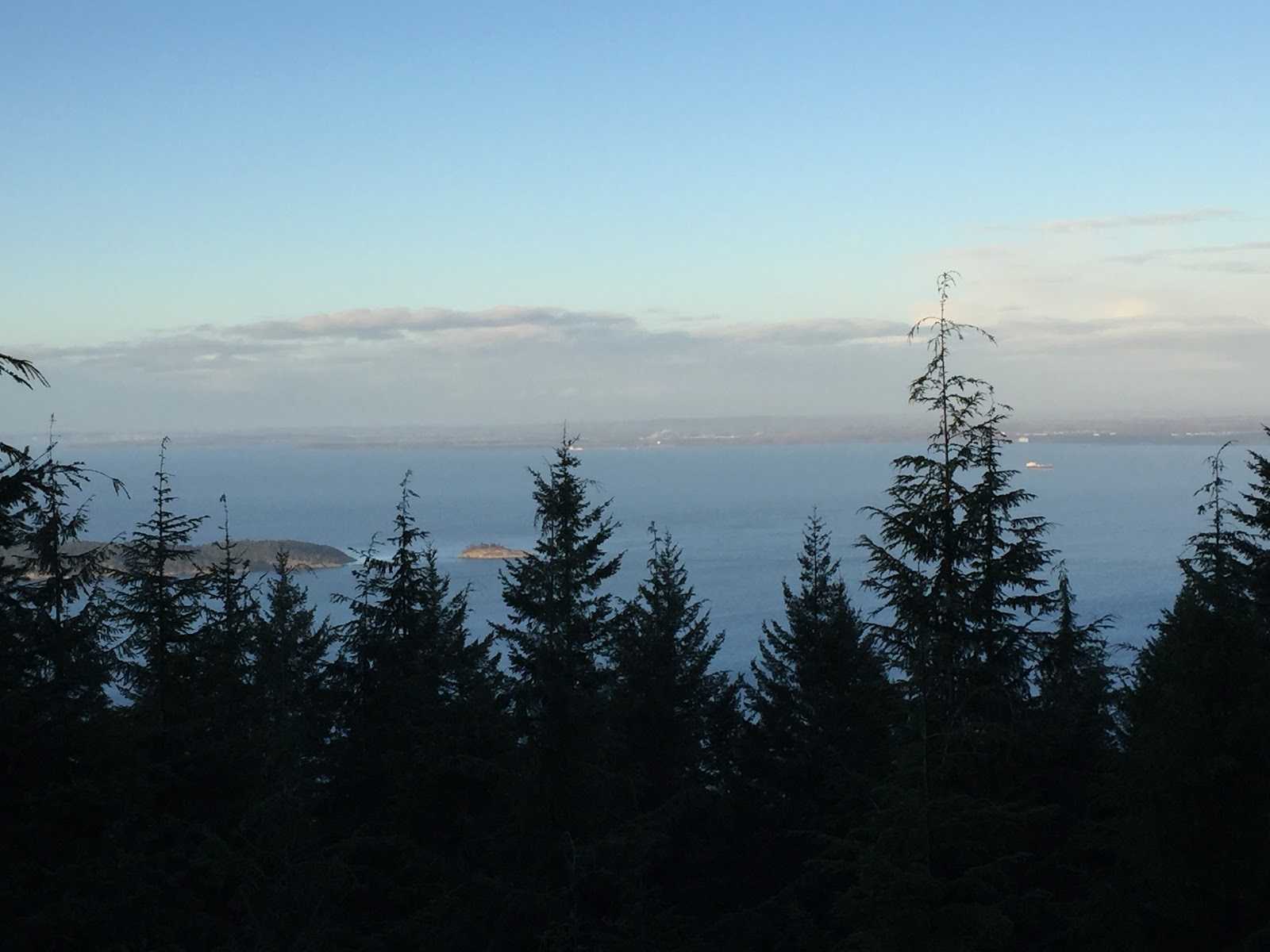 Over the years, the Hansons’ tastes had changed. By the time they were ready to seriously consider home designs, the Summit Prow was no longer their style of choice.

“We wanted something more simple and minimalist and easy to maintain,” Jens said. After dealing for many years with the day-to-day reality of taking care of their 6,000 square foot stucco mansion in California, along with two children and a dog, their aesthetic had changed.  As their children reached college age, they wanted a smaller home with modern furniture and a minimalist, no-frills layout.

Luckily, Lindal had also evolved with the times, developing new, modern home lines through collaborations with Turkel Design and the top-notch architectural firms who collectively represent the Lindal Architects Collaborative (LAC). LAC member architects – all high-profile leaders in the field of modern home design – eagerly took on the challenge of designing signature homes for Lindal that adhered to the guidelines of the modern Lindal Elements system; a proprietary method developed by Lindal engineers, drafters and architects for creating beautiful, functional, efficient homes with almost limitless customization options.

The Lindal Architects Collaborative, with its adherence to the simple yet flexible Elements design tenets, seemed like the perfect fit. In particular, “The David Vandervort Architects design caught my eye,” Jens said, “because it was all minimalist and steel on the outside; a real simple form. The only thing I didn’t like was the wood poles.” Alex concurred. “As soon as we saw the Vandervort designs, we fell in love.”

With the Vandervort 2270 design (the number refers to the square footage of the home), the Hansons could keep the “wall of windows” and pitched roof that had appealed to them in the Summit Prow, while enjoying the striking modernity of an exterior wrapped almost entirely in steel.

A rendering from the Lindal Architects Collaborative planbook shows the Vandervort 2270 before it was modified for the Hansons. 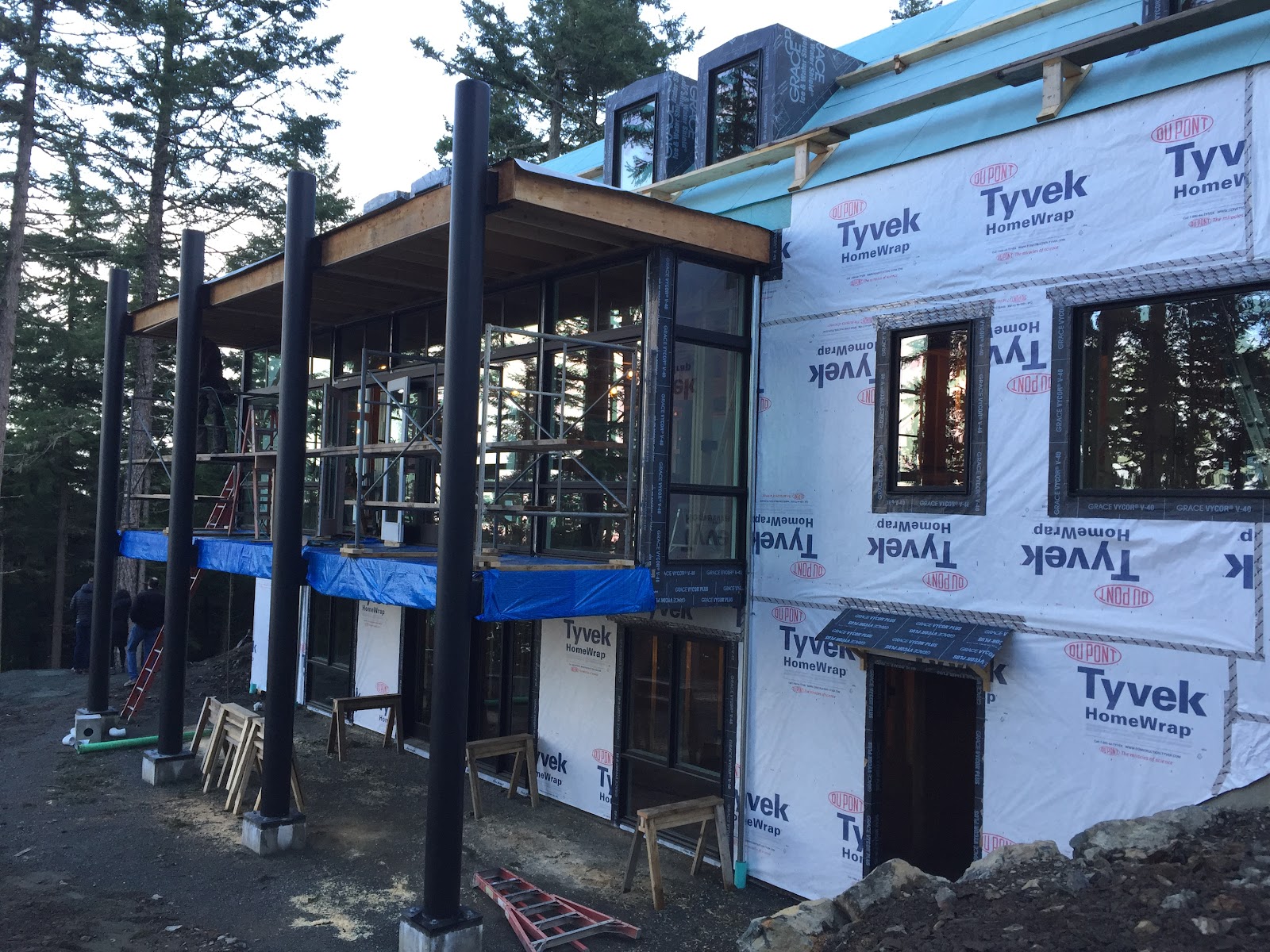 The actual house under construction, seen from the same perspective as the rendering. This side of the house faces out to views of the San Juan islands.

David Vandervort Architects have designed homes in the San Juan Islands for over 20 years. Vandervort’s Pacific Northwest aesthetic blends traditional and modern in fresh and surprising ways. The exterior posts, almost totemic in nature, provide the structural support on which to hang the house, allowing for a wide-open floor plan and an expansive second-floor deck. The alternating window sizes on the long, lodge-style front and back of the house, topped by flat dormer clerestory windows, add visual interest to the exterior, while infusing the entire length of the structure with ever-changing patterns of light.

The Hansons had several meetings with principal architect Vandervort and his colleague, associate architect Mike Butrim, during which they went through various iterations of materials, colors, and floor plans that maintained the spirit of the original renderings while incorporating modifications to suit the site’s particular siting requirements, weather patterns, and the Hanson’s lifestyle. As the house is sited on the side of a mountain, the building crew had to drill through several feet of bedrock to ensure the steel poles were firmly secured and that the house would adhere to the stringent engineering standards required by Lindal’s Lifetime Structural Warranty.

When they couldn’t find a dark enough stain for the wooden poles, the Hansons decided to make the poles out of black steel instead; a first for a Vandervort home design. They took out some of the original entrances and exits, and went back and forth on the color of the steel cladding, settling on a gunmetal grey until their second-to-last meeting, when Jens tentatively put forth a new idea. “In the middle of the meeting I looked up and said, ‘Mike, don’t think I’m crazy, but Alex and I really think it might be cool if we make the house black.’ Mike’s eyes grew huge and he said, ‘That was my original idea for the house.’ He was just doing cartwheels that somebody wanted to do a black scheme with the house.”

An all-black house is a daring and ultra-modern approach that few would dare to try and pull off, but Alex and Jens felt strongly that they were headed in the right direction. 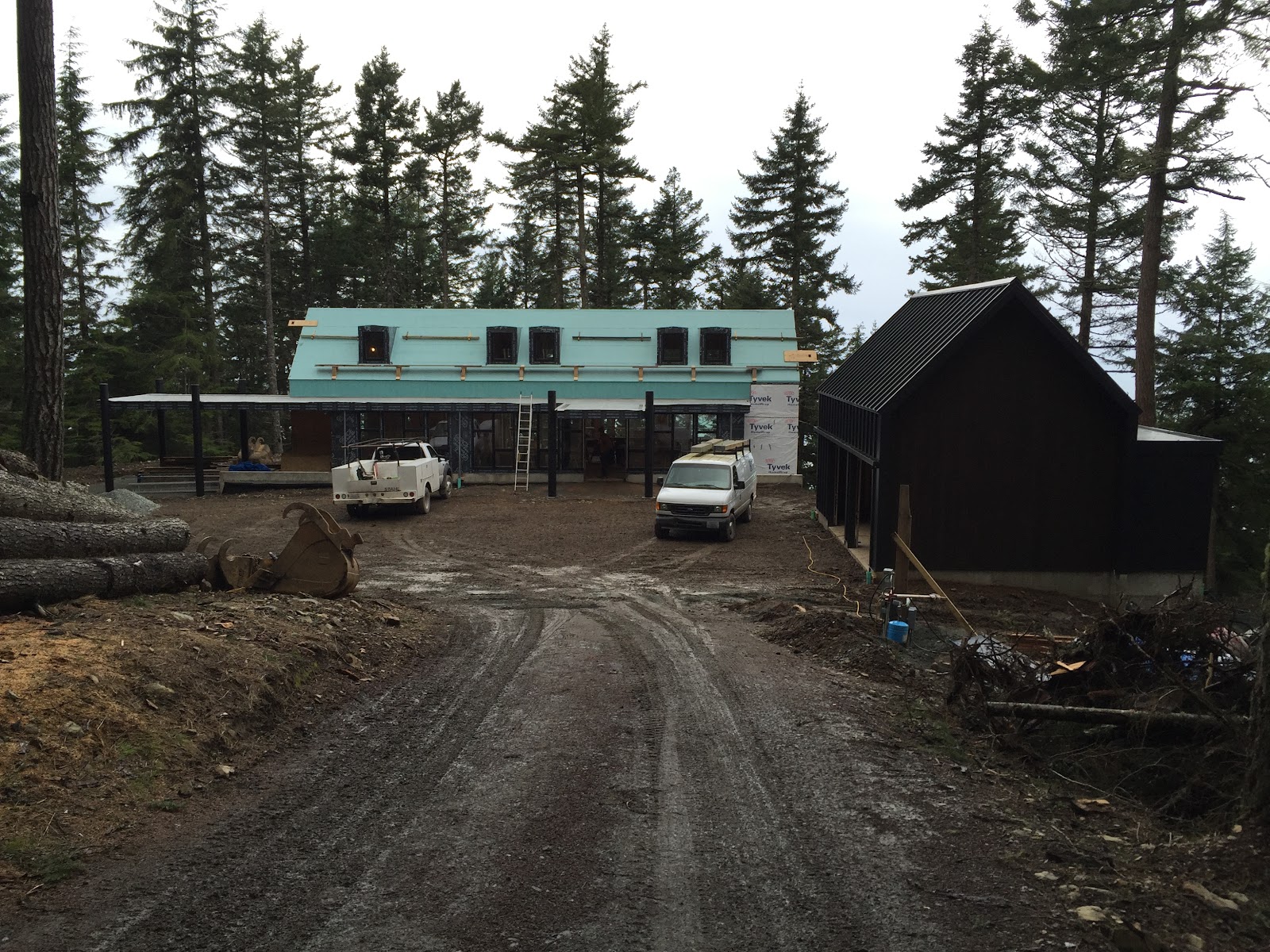 The build in progress, as seen from the front driveway. The garage, at right, is already clad in the same black steel that will be used for the house. Note the extended patio area to the left, where the fireplace was in the original rendering. Steel beams flank the entrance. Flat dormer windows above and alternating window patterns reaching from floor to ceiling at ground level add visual excitement to the black palette.

Said Vandervort of the color choice, “This is a California couple moving to the island and bringing a little of their personal aesthetic. It seems daring, but the elements that come through are the light and the living. The house itself is like a shadow on a shady lot. Reflective light” will play a huge role in bringing the entire structure to life so that it glows from the inside out. “Instead of putting the stark image of a man-made form into the setting, the house fuses into its surroundings.”

At night, the house recedes into darkness. The form is revealed through light alone.

While the house is sheathed in black steel, the short sides of the structure are clear tongue-and-groove cedar, stained a rich brown so dark it is almost black. The concrete foundation where it rises above ground level will be covered in black textured basalt. 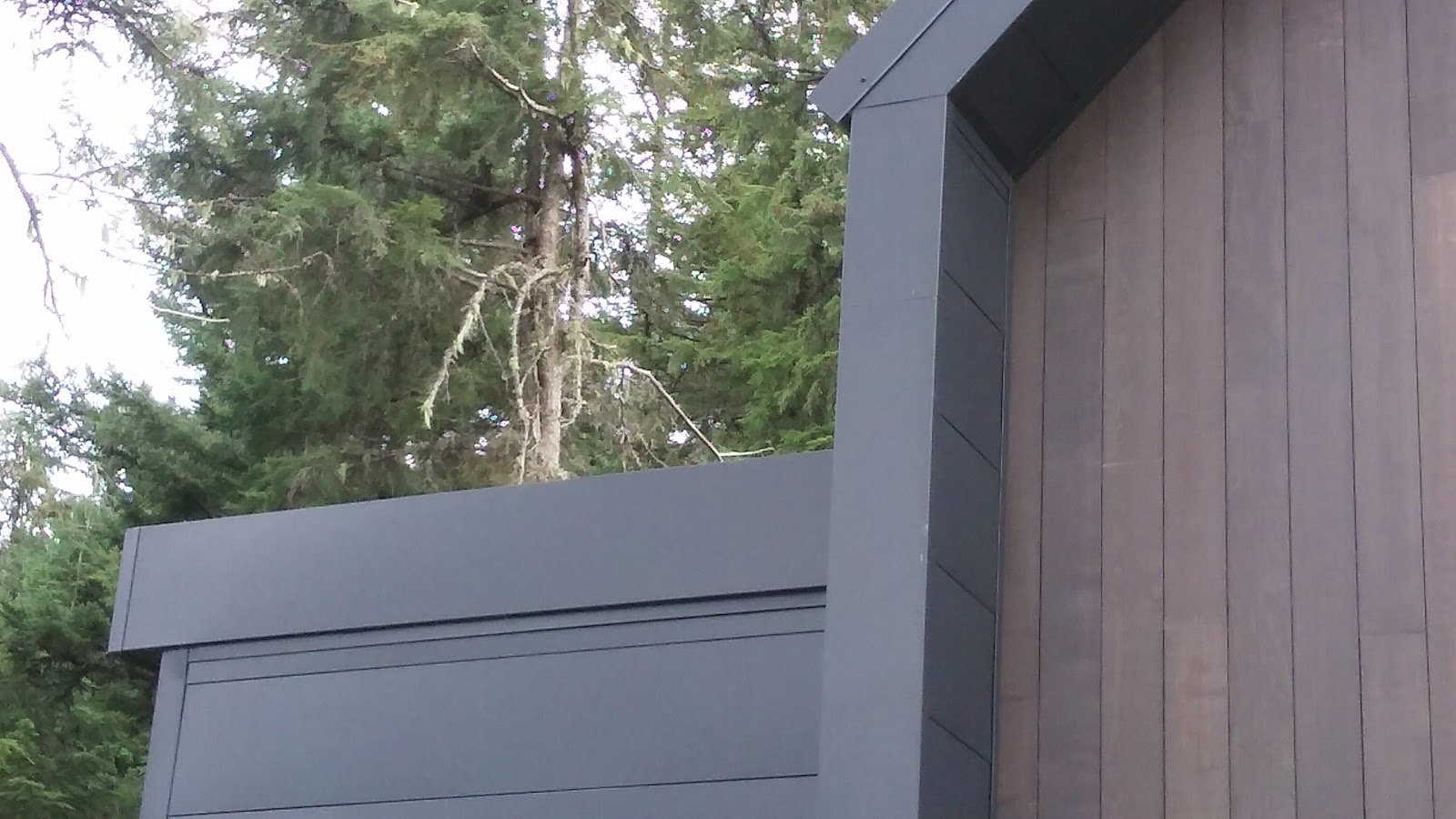 Vandervort thoroughly enjoyed the process of collaborating with the Hansons and with Lindal’s design and operations crew to bring the house to life. In particular, he praised the Lindal Elements system for its efficiency and flexibility. “It’s freeing to have that definition of the system,” he said. “There’s a real logic to it. For architects, it’s a dream to have the system dictated and a set of parts to work with.”

Vandervort also was thrilled by Lindal’s efficient delivery of its pre-engineered kit of parts to the remote mountain location. “Getting materials to the site was a benefit of Lindal,” says Vandervort, who has built over 35 houses on the islands over the years. “Instead of 57 trucks to the site, we had two.” 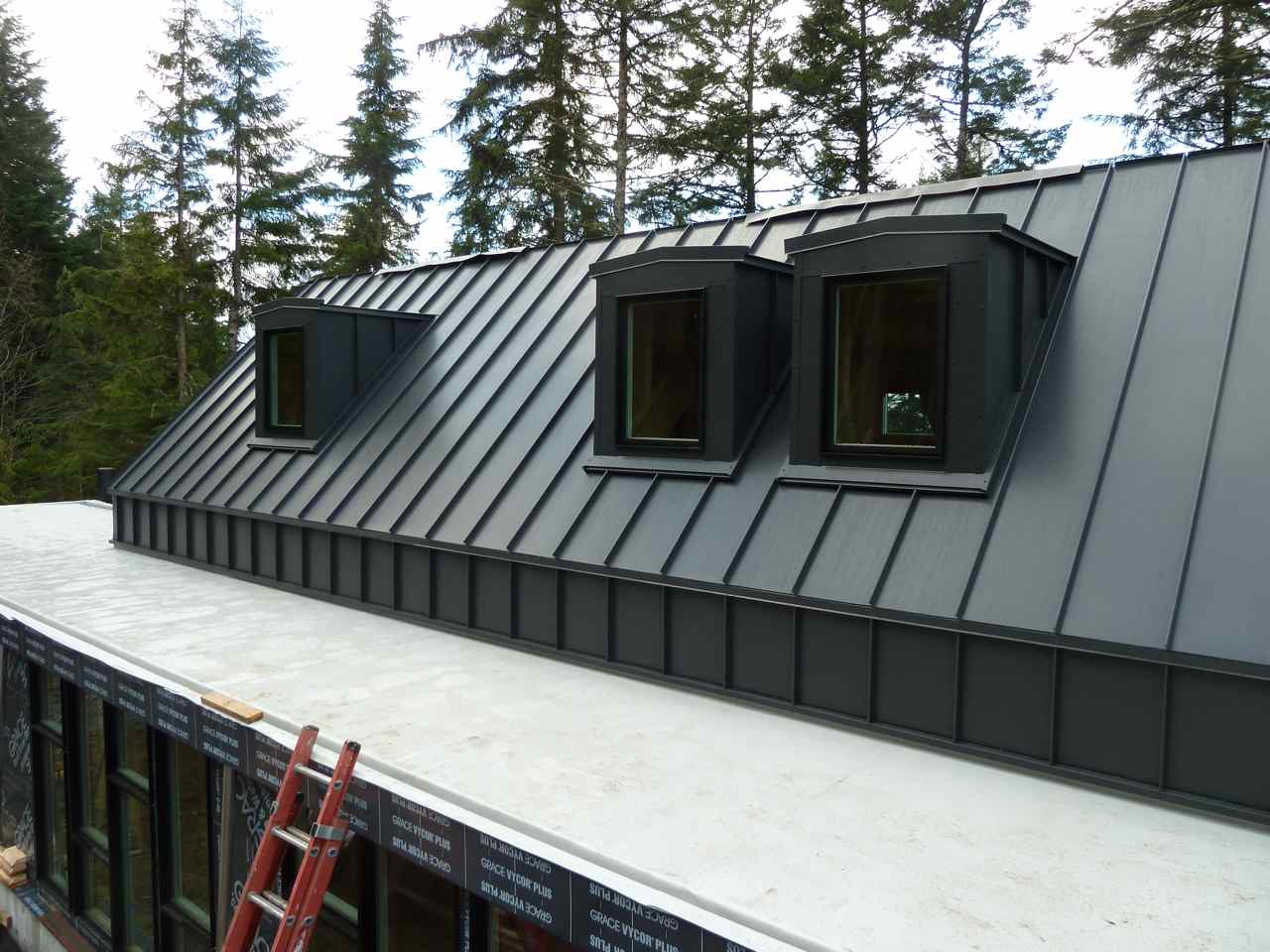 An innovative low-slope roof design allows for snow loads to melt and easily drain away.

A Site for Sore Eyes

The lush and verdant site is populated with thick stands of hemlock, cedar and Douglas fir. Other than two patios that extend from the back of the house and the left-hand side, with floors of Brazilian slate that flow seamlessly from interior to exterior, the Hansons intend to allow their 11 acres to flourish with moss, salal and other native plants rather than formal landscaping. They also want to preserve as many of the onsite trees as possible, only thinning enough to secure a bird’s eye view of the Puget Sound and surrounding islands. Behind the house, Jens points out “a craggy old tree” that he made sure to save near the property. “We wanted a place for eagles to land,” he says.